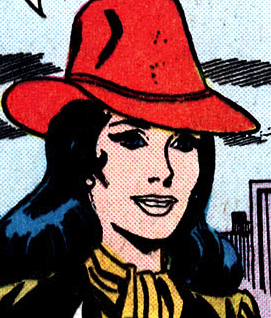 Aside from the fact that this lucky young woman has one of the sexiest genetic make-ups in the entire the DC Universe (yes, Talia, someone else beat Damian to it), she is easily one of the most charming personalities out of the Bat family who's very hard to resist. It's enough to say fuck the idiot who was lucky enough to sleep with her pre-Crisis to expect less from someone so extraordinary. (More on that later).

One of the things I find most appealing about Helena Wayne is how very self-confident she is as a person and does everything with style. Regardless of her level of experience in any field of endeavour, she always puts her best foot forward and never gives up when she does fail at something. She firmly believes that if she sets her mind to it, she can accomplish anything she wants. While she often compares mental notes with her own father on the side of being an effective crime-fighter, she is nevertheless perfectly secure with her own identity and skills.

On that note, another thing that is equally cool about Helena is that she's not afraid to be herself around other people. She is someone who presents her idiosyncratic self as is, she says exactly what's on her mind, and she's blunt and straight to the point. She never beats around the bush and does exactly what she sets out to do even if others think she's weird for it. In fact, plenty of the people she works with think she's a little off her rock, but she's perfectly okay with people thinking that. It's not going to stop her from preparing that soufflé in her Huntress costume or keep her from having that glass of wine with a box of chocolate chip cookies. It similarly won't faze her if you find her sexual choices 'questionable' for bringing a girl into her room, or if you're that person behind the fourth wall savouring every moment that she and her best friend are in each other's arms, or dining and wining each other. (Yes fandom, I do read all your comments on Tumblr :P).

While she's not beyond taking full advantage of her family's money to enjoy the more posh things in life (including taking you out to a nice lunch), she is also one of the most compassionate people in the world (at least pre-Crisis) and often goes out of her way to help any person in need. She cares deeply about protecting the civil rights of others and takes women's issues very seriously. She's always there for her friends and family when they need her, and she's even willing to lend an ear to someone who commits a crime if they are an otherwise law-abiding citizen. Even when she herself is experiencing problems in her own personal life, she prefers to talk things through like an adult and work something out in a mature way. This doesn't mean, however, that she will put up with misogynistic behaviour or sexist attitudes from an intimate partner.

On the flip-side to all of those wonderful things about Helena Wayne, however, she does have something of a 'dark side' as well. For example, she has been known to push the most important people in her life away and withdraw herself from her normal every day activities when she's in a dark place in her life. When she especially puts on her Huntress mask, things can especially get ugly for those who encounter her. But that is the topic for Day Four tomorrow...
Posted by Diane Darcy at 20:43