Seven Reasons DC Comics Should Love The Huntress, Day 02: She Was A Lawyer 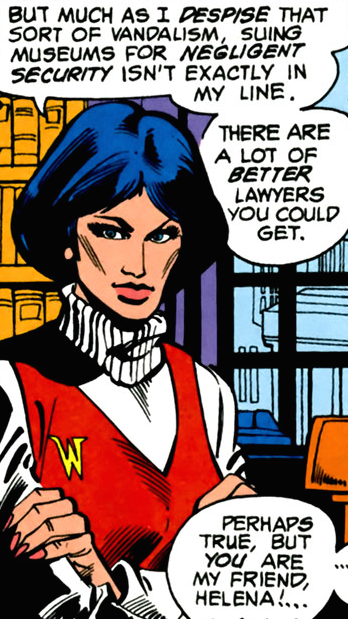 Continuing our discussion from yesterday, another thing that immediately drew me to the character of Helena Wayne was the fact that she had a career in law! While career women have a lot more representation in today's media than they did at the time of Helena Wayne's initial publishing, they are still regrettably lacking in representation in superhero comics, including your own. Even the ones who did have careers in the past no longer have them in the New 52. Why is that?

Off the top of my head, the only career women I can easily name that still have their careers in the New 52 are Lois Lane and Amanda Waller, and they don't even wear capes and tights to do what they do. Kara Zor-L, Power Girl, debuted in the New 52 with her career as the entrepreneur Karen Starr still intact, but now that she's back on Earth-2 just in time to die with her world, that's one less career woman we'll probably see this year. Your new Helena Bertinelli has a new career as a spy in the New 52 (she was formerly a teacher), but she's also no longer the Huntress despite not being from the same universe as the Earth-2 Helena Wayne. Even Diana Prince no longer has her career with the US military, and has no other roles outside of being 'Wonder Woman: Warrior Princess' and Superman's new bed buddy. Even Helena Wayne no longer has her career in law and has little else going for her outside of being the Huntress, Batman and Catwoman's daughter, and Power Girl's best friend and partner.

I can't help but ask, DC Comics, why did these women have to lose their careers to be a part of the New 52? Not only did the loss of career diminish their story potential significantly, but they lost a huge layer of their characters along with it. What's more is that the narratives that replaced those previous ones haven't been worthwhile narratives, in my opinion. If I may be brutally honest here, the newer narratives have been lazy and uninspiring at best, purely directionless and limiting at worst. This rings especially true for Helena Wayne. Prior to the New 52, the Huntress was only one part of her character. Now that's all that she is besides being the daughter of Batman. Prior to the New 52, Helena Wayne had a life and other interests outside of fighting crime as the Huntress. Now? the latter is all that she does when she's not being written as a plot device to be brutalised by lazy writers (I'm looking at you, Daniel H. Wilson). I honestly don't call this an improvement.

In my opinion, a character needs to have more layers and sides to them than just their most prominent trait. Allowing your characters to have a career is one way that this is accomplished. Sure, I love Helena Wayne as the Huntress, and I love what she does with all of that training her parents gave her growing up, but I also love her as a graduate from Harvard University and as career woman. These additional traits make her a more well-rounded character and make her feel more relatable to the reader. By making her a Harvard University grad, we learnt that she was quite studious and that she took her education seriously. That she was valedictorian told us that she was top of her game. The fact that she excelled at gymnastics when she was in school told us that she was pretty athletic and provided a foundation for her to fight crime as the Huntress. The fact that she chose law as her programme of study spoke volumes of her commitment to justice.

As a lawyer, there was plenty of story potential to be utilised here that was sadly used only once in the pre-Crisis era, and that was in the brilliantly written America vs The Justice Society miniseries by Roy Thomas. In the one time that we saw her put her law degree to use, it was on a major case in which her own father had--through a diary--accused the entire Justice Society of assisting Adolf Hitler during World War II. The Justice Society was tried for treason by the US Supreme Court in Washington DC, and Helena served as their attorney. In this one story, we saw what Helena was quite willing to do to win a case. In particular, we saw that she was very persevering and not easily wavered, even when she was up against Dick Grayson who took her deceased father's side. She was even willing to out her father as Batman (effectively outing herself as the Huntress) if that was the only way to prove to the court once and for all the innocence of her clients. 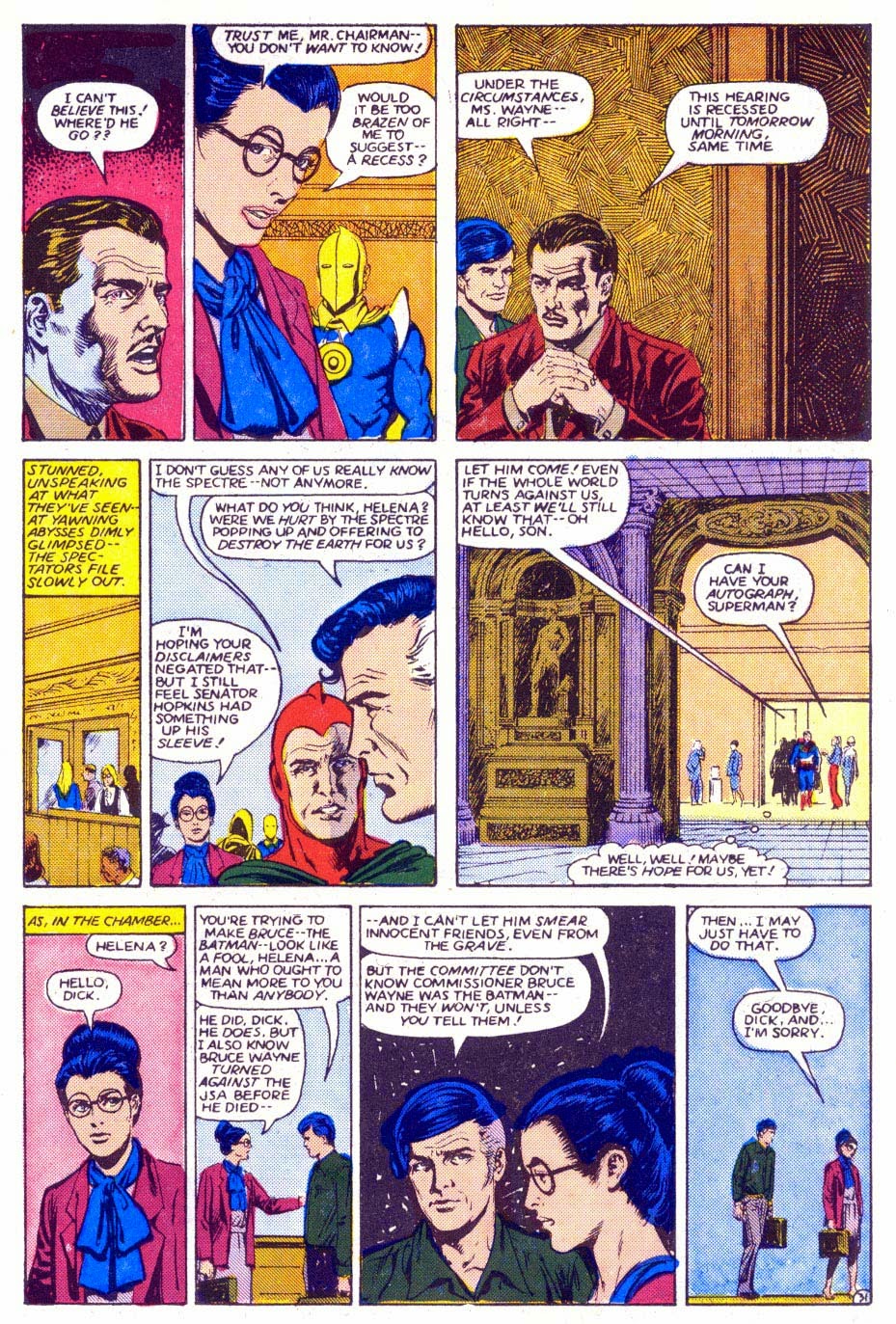 This to me was compelling storytelling because Helena found herself in a sticky spot. On the one hand, she couldn't find it within her heart to tarnish her own father's reputation. On the other hand, she was also not going to allow him to put innocent friends in prison for a crime they didn't commit from beyond the grave. It was a very trying experience for her, and no doubt, her most challenging case in her career. Having read that story, I found myself wanting to read more stories with her functioning in the lawyer role to balance out her stories as the Huntress. Sadly, that never came to fruition because you retconned her out of continuity following the Crisis on Infinite Earths event, and later rebooted her as Helena Bertinelli, who was a very different character all together.

With her reintroduction in the New 52, I was very excited for this new Helena Wayne. Very early on in the reboot, I thought: 'Maybe DC will finally get to tell more stories with her as a lawyer, in addition to ones that feature her as the Huntress.' I was also looking forward to seeing her have more adventures with Kara Zor-L as Power Girl (which you delivered), and I wanted to see how she would be developed alongside the Earth-2 Justice Society. To be more specific, I wanted to see how she was going to balance out the demanding role of her career while functioning as a superhero who was also a prominent member of the Justice Society.

All that I described above is what I wanted to get out of your new Earth-2 in the New 52. A simple modernised take on an old concept. A fresh new take on a much beloved character while preserving the traits that made her both Helena Wayne and the Huntress. You could not have disappointed me more than where you took Earth-2 at the start of James Robinson's run by turning your more progressive Earth into an even more grim, male-centric world than your primary Earth-1 universe. (Literally missing the point of Earth-2). It was especially insulting that you removed Helena from her own world just so that you could develop a faux "Batman" (her grandfather of all characters) in her place, and he's not even that interesting a character. Characters like your Earth-2 Thomas Wayne are a penny a dozen whereas you rarely get a character like Helena Wayne. To add further insult to injury, I was even less impressed with your Earth-2: World's End weekly which is basically the New 52's Countdown: a lot of spectacle and pointless deaths, and nothing in the way of a real story or character development. It is also a huge waste of great characters that had so much story potential and frankly deserved better than the writers and editors who got them.

I don't know what's going to become of the Earth-2 characters following Convergence, but I have to be honest with you, DC. You've succeeded in killing my confidence in your ability to make good decisions with the characters you own, especially given your track record with Earth-2. I sincerely hope you will prove me wrong on that later this year. Maybe Convergence will result in the restoration of the Justice Society Earth-2 we love so much, with these characters' original histories restored even if a little upgraded. The newer characters that debuted on Earth-2 with the New 52 like Queen Marella, Kendra Muñoz-Saunders, and Khalid Ben-Hassin don't need to go away as they can easily be the newer generation Justice Society. I'm just saying you can still keep the ones that existed in the World War II era like Jay Garrick, Alan Scott, Kent Nelson, etc, thus restoring the legacy of the Justice Society. One thing I do insist on reinstating is Thomas Wayne's status as Bruce's dead father who died alongside Martha on Crime Alley. There was absolutely no reason to change this narrative, especially on a world where Bruce Wayne already has a daughter of his own to succeed him. Let Helena be her father's successor. Let her pick up where he left off while doing something of her own. (Like being a lawyer for instance?)

If the Earth-2 characters do end up on Earth-1 following the Convergence event, I will admit it will be a little crowded. Nonetheless, I would still like to see Helena Wayne pursue a career in law again, and actually have a life outside of being the Huntress. This doesn't mean I want to her to stop being the Huntress, but it does mean that I want her to have more layers to her character in addition to being the Huntress. On that note, I would also like for Kara to resume her career as Karen Starr, the entrepreneur and owner of Starrware Industries. (I don't think that is asking too much, considering what are next topic of conversation is...)
Posted by Diane Darcy at 00:52