Seven Reasons DC Comics Should Love The Huntress, Day 04: She Had Her Own Narrative Complete With Her Own Cast 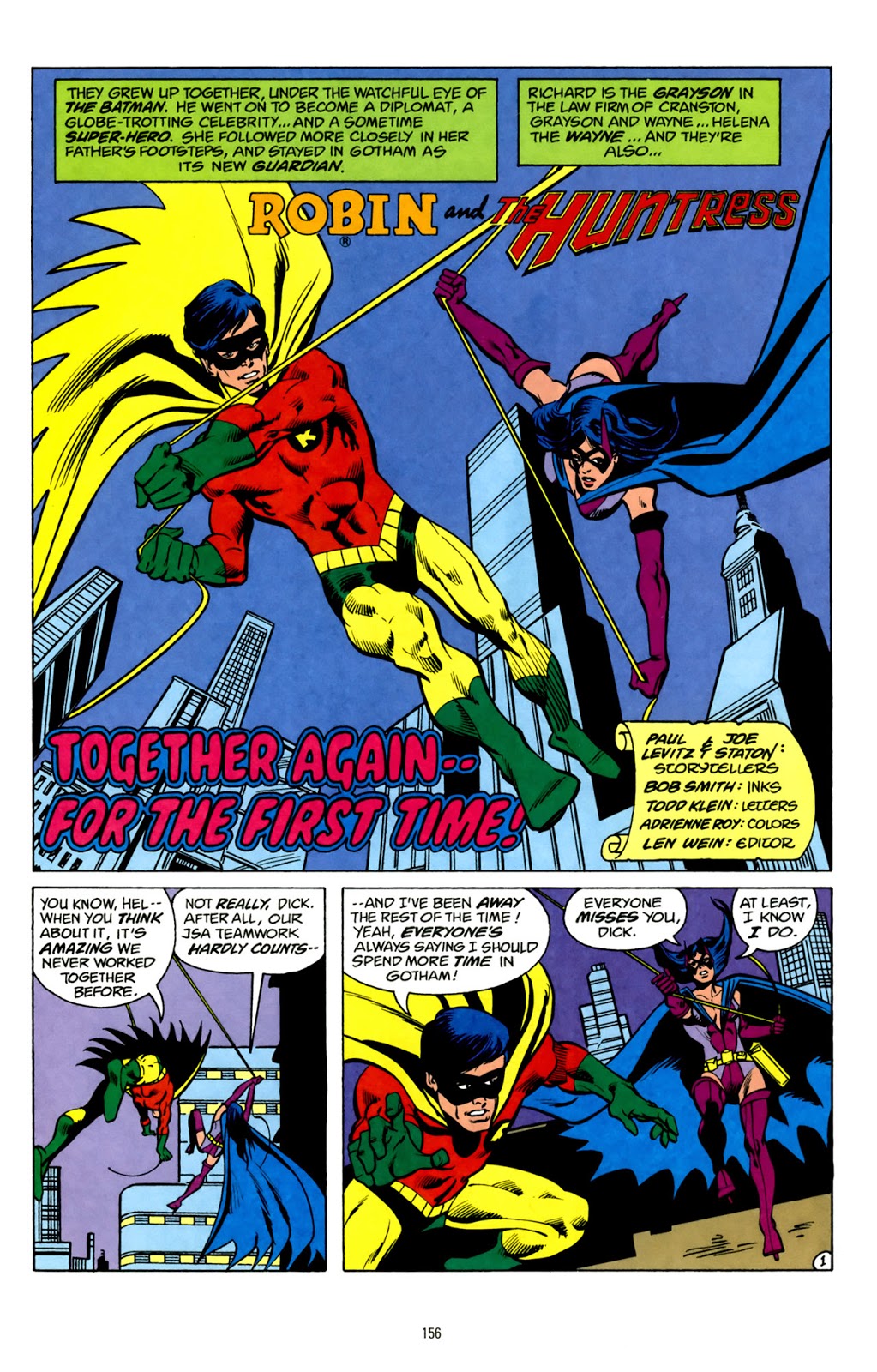 We're on Day 04 of our ongoing discussion, and we still have so much more to go over.  One of those things being the fourth reason I love the Huntress, which is the fact that prior to the New 52, she had her own narrative, complete with her own supporting cast of characters.

As I've consistently said throughout this series of posts, I really don't understand many of the creative choices you've made with her character in the New 52, many of which have been wholly regressive for her character. I especially don't understand your obsession with her grandfather occupying her story beyond the obvious sexism (at both the editorial and creative levels), and this isn't even going into the misogynistic shitfest that has been your Earth-2: World's End weekly--a narrative that added further insult to every injury sustained being a fan of this character.

It really is one of those things that begs the question 'how is it that male industry professionals in the 1970s were far more progressive thinkers than the ones currently developing her "narrative" in the year 2015?' How is it that writers in the Bronze Age right through the beginning of the Dark Age actually knew how to write her character, and didn't struggle to write her as a compelling heroine carrying on both a rich legacy and finding her place in the world?

In many ways, Helena Wayne's story in the pre-Crisis era along with her interactions with various characters in her life has been a documentation of her own evolution as a character. When she wasn't battling world-devastating threats alongside the Justice Society (which we'll discuss in tomorrow's post),  her life revolved around four things: her career, her superhero identity, friends and family, and her boyfriend, all of which added different layers to her character.

As we discussed in the previous post, in making Helena a lawyer we learnt a lot about her passions in life, and what she is quite willing to do in order for justice to be served. We especially learnt of her perseverance and her fierceness in cases that are important to her, and we also learnt that she strives for excellence. But what are her actual experiences in the workplace? Despite being recognised for her accomplishments in law, she wasn't respected by everyone, including one of her associates, Roger Demarest, and her boyfriend, Harry Sims, both of whom were overtly sexist towards her.

In Roger's case, he was staunchly resentful of the ease with which Helena acquired a junior partnership at the law firm in which he was also employed. In Particular he resented the fact that he still had to build his experience and credibility before he could be made a partner at the law firm whereas Helena was made a partner immediately after graduating with her law degree. He was especially aware of her wealth and all of the privileges that came with it. As such, he often looked towards any flaw in her character to invalidate her worth to the law firm, such as her frequent tardiness, and her tendency to space out during meetings. His insults were often linked to her gender, such as attacking her 'inability' to perform and citing physical attractiveness as the only thing she had to offer other than her father's money. Roger was very much straw misogynist in his characterisation often conforming to identifiable stereotypes with misogynists.

In Harry's case, he originally had a loving relationship with Helena Wayne, whom he respected for her accomplishments in the field of law...up until he discovered that she was the Huntress as well. Upon discovering Helena's dual identity as both an enforcer of the law and as a vigilante, his relationship with her quickly went on a downward spiral, often creating conflict for them both. On the one hand, a source of frustration for Harry was Helena's unwavering commitment to her work as the Huntress, which he viewed as a dangerous endeavour. From Helena's end, her source of frustration with Harry was his patriarchal views on relationships and women. Not only did his own internalised sexism come out to the surface the moment he found out his girlfriend was a badass superhero, but Helena was especially intolerant of his controlling behaviour. In her opinion, if he genuinely loved her for who she is, he would accept her as is, and not try to mould her into the person he wants her to be. 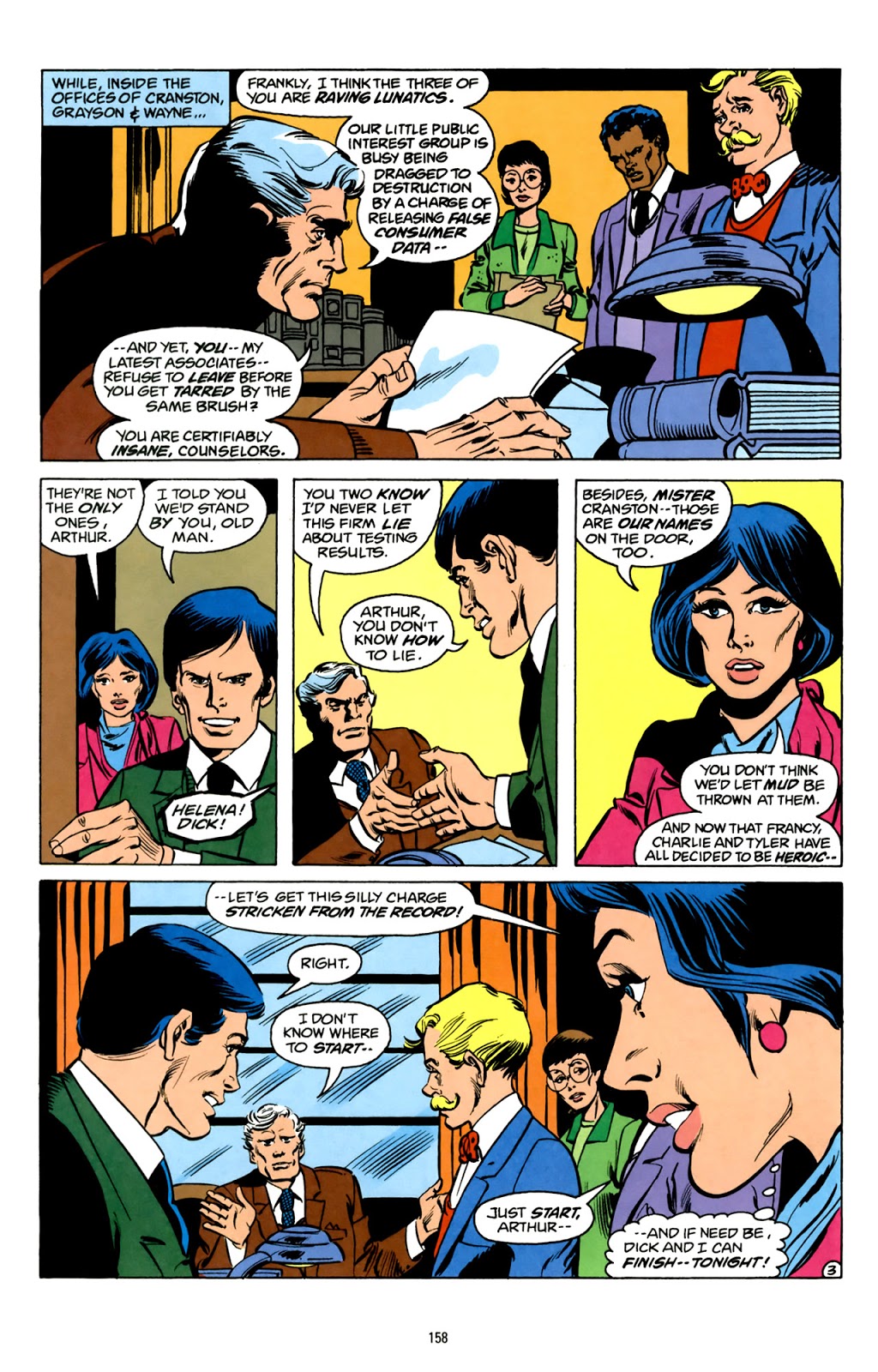 Between her male coworker and her boyfriend (who was also an attorney) alone, Helena was constantly made aware of her gender in male-dominated spaces, and had a low tolerance threshold for sexism. In many cases, sexism even influenced how she fought as the Huntress, often prompting her to beat up criminals unconscious if they insulted her on the basis of her gender. Over a period of time, she started withdrawing from some of the most important people in her life and developed a more aggressive fighting style as the Huntress. When investigating a case, she was not beyond using violent methods as a way of obtaining information and to be taken seriously by male criminals in particular.

Despite sexism being a part of her everyday life experience in her professional, superhero, and sex lives, Helena did also have healthy relationships with other men in her life. Among those was her senior partner, Arthur Cranston, who had a profound respect for her as a lawyer, and often looked the other way at Helena's idiosyncratic behaviour and tendency to take frequent time off from work. Another man she had a good relationship with was her own father, Bruce Wayne, and their butler, Alfred Beagle who often supported Helena's endeavours. She also had a very close relationship with her father's ward, Richard Grayson, whom she viewed as a brother.

With Dick in particular, there was a profound respect that existed between them both as professional lawyers and as superheroes. He was also Helena's frequent partner during Justice Society and even individual missions when she wasn't with Power Girl. At one point, Dick even developed romantic feelings for her, which was also a source of conflict for them both, most notably during the events of America vs The Justice Society. Despite having ups and downs, Dick and Helena managed to maintain a loving relationship without making it sexual.

You know what was the best thing about Helena Wayne's pre-Crisis narrative, DC Comics? It was a nice balance between having a personal life, as well as an extraordinary life as a superhero. All that I described above is a huge part of what made the original Helena Wayne a more relatable character. In addition to being a superhero, she also dealt with very real problems that real life women deal with on a daily basis such as workplace sexism, and even being in good and bad relationships. As I said earlier in this post, having all of these relationships in Helena's life added different layers to her character. Now? She has none of this going for her, not even a career, let alone an actual narrative. She is literally one of the most underdeveloped characters existing in the New 52, which is not befitting a character who falls into the category of 'Batman and Catwoman's daughter.'

Outside of her relationship with Power Girl (which thank the gods you kept), she doesn't have any of her other existing relationships anymore, not even with the Earth-2 Dick Grayson who is a stranger to her now. Even less so with Alan Scott and Jay Garrick who were also originally friends to her. You even killed off her parents, which further limited her story potential, and you replaced them with the worst version Thomas Wayne you've come up with in your entire publishing history. Even the Flashpoint version of him was more likeable than the version of him that usurped Helena's place on Earth-2. As a major consequence of that last one in particular, she doesn't have much in the way of a real raison d'être anymore because, again, you took that away from her and gave it to her grandfather, a character that was never meant to have a bigger role in the Batman narrative, than being the dead father who caused Bruce to become Batman.

I know I'm sounding like a broken record at this point DC Comics, but I can't stress enough how badly you've been treating Helena Wayne in the New 52, robbing her of essentially everything that made her a great character in favour of another "Batman." It especially speaks loudly of your unchecked sexism that you went this route since you never do this sort of thing with Damian Wayne, Bruce's Earth-1 son. You even have more alternate versions of Damian than you do of Helena, further diminishing her prominence in your franchise. I hope to see changes to this status quo later this year, DC Comics, cause what's been done to Helena Wayne these past three years has been pretty unacceptable.
Posted by Diane Darcy at 00:52