Seven Reasons DC Comics Should Love The Huntress, Day 03: She Is Friends With Power Girl 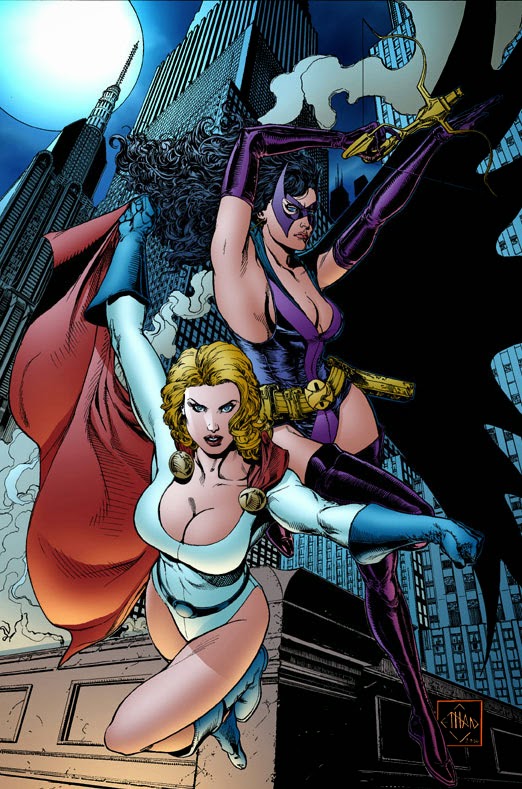 Good news! Reinstating the Earth-2 Huntress and Power Girl friendship was one of the best things you did in the New 52! I just wish their book actually had a better editor, a more clearly defined direction, and especially a different creative team. While I 110% understand why Paul Levitz was attached to a Huntress/Power Girl book given his history with both characters, it was still a book that could've greatly benefitted from being written with more depth, and by a writer who doesn't shy away from exploring loving relationships between two women on a deeper level.

Remember that thing I said earlier about women loving to see relationships explored in narratives? This was one of those books that provided an excellent premise for that, which was a major hook for female readers. This is especially true since we are dealing with brand new versions of Huntress and Power Girl who are--in many ways--major departures from the pre-Crisis originals. We are dealing with a Huntress and Power Girl that are just starting out for the first time, which provided a clean slate for exploring and developing why these two women are friends and what makes their relationship so strong.

I will admit, I do not understand the mandate to make superheroes unhappy as part of them being superheroes since I find this kind of narrative limiting and offers little opportunity for character development. There's also the fact that I strongly believe it is possible to write superheroes as whole human beings who take risks with love and relationships, and still write them as people who actively fight against injustice and major world threats. This goes back to what I said in previous discussions about giving characters more layers to their being than just their most defining layer. Peeling away many of the layers that made Huntress and Power Girl genuinely interesting characters is one way these two characters suffered in the New 52, but one thing that they did have working in their favour was their friendship to one another.

While Levitz' writing was flawed on many levels, he did make a point of establishing that Huntress and Power Girl weren't just casual friends who met at the pub for a drink and talked about how their day went, who they slept with that week (though Kara did plenty of that), who upset them that week, or the usual gossip. He actually established that their friendship was close and very personal to them both. He showed that the characters were very comfortable with each other to the point of being emotionally supportive and affectionate towards one another. Though Levitz was also quick to dismiss any homoerotic subtext between the two women by reminding us that Kara is straight in narrative, he did nonetheless provide some good ground work for a future writer to play with.

What is it about Huntress and Power Girl that makes them such a sexy pair of friends? One obvious part of the appeal is that they are the daughter and cousin of Batman and Superman respectively, the first world's finest. The other part of the appeal is that despite them being a part of two great legacies, they're also very different from their respective father figures. Whereas Bruce Wayne and Clark Kent would rarely be seen together outside of working on a mission together as Batman and Superman, Helena Wayne and Kara Zor-L actually spent time together out of costume. They would actually go out to a restaurant together with usually one woman (in most cases Helena) paying the cheque. They would actually have a girl's night out. They would actually go to each other for comfort whenever one of them was in a dark place in her life, and they don't shy away from expressing love for one another. This is literally the recipe for getting shippers to ship. 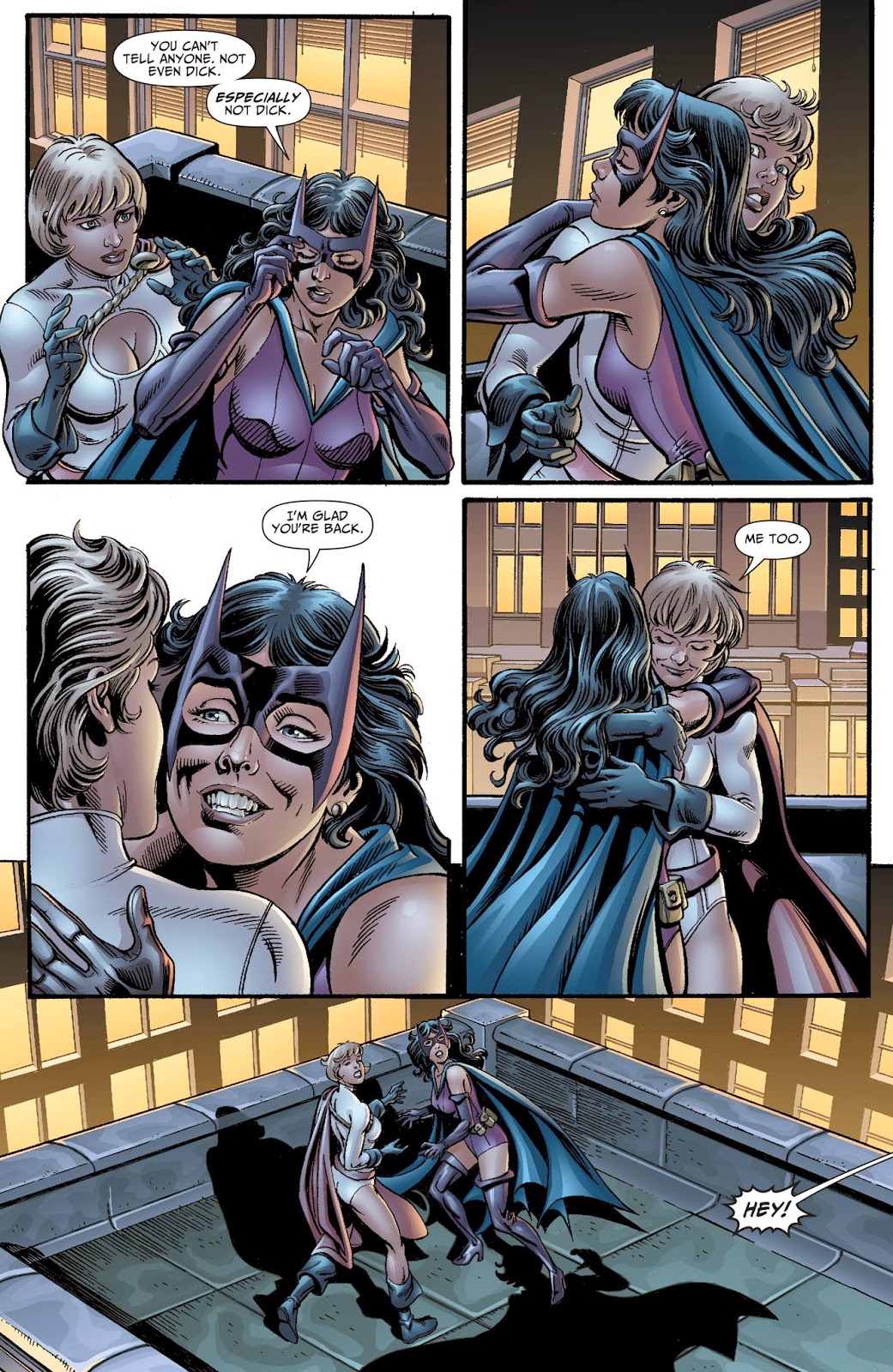 While watching them fight monsters and criminals together as Huntress and Power Girl is always fun, in my honest opinion, their 'down time moments' are a lot more interesting and the part of their narrative I look forward to the most. Not only does it make them feel more relatable and down to earth to see them participate in normal, everyday life activities, but it's also fun to see how they interact with each other.

In the pre-Crisis era, Helena brought out Kara's softer side when she was usually characterised as being very tough-as-nails and impulsive in most situations. It was not often that you saw Kara accidentally break a glass in the presence of a fine young lady smiling at her from across the table. It was also not often that you saw her more playful side whenever Helena challenged her in something that she knew she could easily beat her in. This didn't mean that Kara took any bullshit or that she didn't point out something wrong with Helena's position on something, but she nonetheless loved having this woman in her life.

As for Helena herself? She gained the friendship of a woman who was as different as she was. Though not super-powered herself, she also didn't have a normal normal life despite a normal upbringing. She was a woman who had Batman and Catwoman for her parents, and was even inspired by them to continue their legacy as the Huntress. For her, it was refreshing to be able to be her full authentic self in the company of another person who wasn't her immediate family. With most people, she had to hide a significant portion of herself in order to be accepted and learnt the hard way--through her boyfriend--that letting others in on her secret was a recipe for a complicated relationship. It was honestly no surprise that during a time of personal crisis, Kara was her default go-to-person for emotional support and comfort. That she could confide the most intimate details of her life to Kara and no one else--including Dick Grayson--speaks volumes.

I can't say that I've enjoyed the changes that were made to the characters' personalities in the New 52, essentially turning them into parodies of themselves. I can't say that I've enjoyed the overly clichéd bickering between friends either. I didn't enjoy that stereotype as a kid, didn't like it as teen, I still don't like it as an adult. But! With Convergence coming up in a few months, I hope that a revisiting of these characters in their original incarnations will inspire some much needed change to their current versions. To be more precise, I would like to see them characterised as adult women with real personalities and not as caricatures of women.

In my opinion, Kara works best as a tough-as-nails but intelligent and mature young woman who is both comfortable with herself and values close relationships with other people. None of this 'preoccupation with boys' coupled with 'dumb blonde jokes' nonsense that feels so out of character for her. Helena similarly works best as an emotionally-healthy, adjusted young woman who is actually smart, mature, and treats other people (especially her best friend) with respect. None of this 'Bat brat' 'female Damian' personality that they have going for her in the New 52 that also feels very off for her character. As for their friendship itself? It works best when both women are written as being able to complement each other in a way that feels organic for both characters without reducing them into offensive gendered stereotypes. If Geoff Johns was able to write the Huntress and Power Girl friendship with depth and genuine character development post-Crisis, I am not led to believe these two women are difficult to write. Writers just need to not be lazy when writing them.
Posted by Diane Darcy at 00:52