Past and Present: Pre-Crisis Wayne vs New 52 Wayne: Introduction 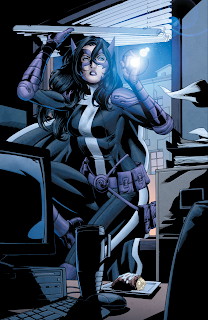 One of the things you get accustomed to as a fan of the 'Big Two' publishers is that decades-old characters get subjected to change over a period of time. Some of the changes are progressive, and others regressive depending on the people in charge at the two companies at any given time.

One way that DC Comics stands out from Marvel is their tendency to do hard reboots of their universe as a way of streamlining continuity whenever it gets written out of control. The first DC reboot took place in 1955 when the company replaced their older Golden Age characters with brand new characters, effectively kickstarting the Silver Age of comics. The Green Lantern went from being Alan Scott to Hal Jordan, the Flash went from being Jay Garrick to Barry Allen, but the original trinity of Batman, Superman, and Wonder Woman remained intact with slightly altered histories. The heroes of the Justice Society were similarly replaced with newer characters, leading to the formation of the Justice League.

In 1961, another soft reboot occurred of sorts with the Flash of Two Worlds story in The Flash #123, which reinstated the Golden Age continuity as existing on a parallel world known as Earth-2, effectively establishing the existence of the DC Multiverse. With the establishment of Earths 1 and 2, writers began to experiment with different ideas that allowed them to take DC characters in bold, new directions without disrupting established continuity. What if the Golden Age Superman married Lois Lane and actually grew older? What if his cousin, Kara Zor-El, became a hero known as Power Girl instead of Supergirl? What if the Golden Age Batman married Catwoman and had a daughter who later became the Huntress? What if the Golden Age Wonder Woman married Steve Trevor and had a daughter who became the hero known as Fury? What if the Justice Society heroes grew older and served as inspiration for a new generation of heroes?

The existence of the DC Multiverse allowed for different kinds of stories to be told with various DC characters, but it was also used as a means of retconning bad stories out of existence, effectively establishing multiple versions of DC characters. At some point, DC started thinking that having too many different versions of the same characters would 'confuse' readers and decided to do yet another hard reboot in the form of Crisis on Infinite Earths in 1985. The goal of the Crisis reboot was to streamline the multiversal continuity into a single universe with a single continuity, containing only one version of each of DC's characters. For the most part, the idea worked, but it also created problems for characters like Power Girl, Fury, and the Huntress whose existence relied entirely on the existence of alternate universe versions of Superman, Wonder Woman, and Batman.

Without the Golden Age trinity, all three characters were given completely new origin stories, resulting in DC making even bigger messes of these characters. Post-Crisis, Fury kept her original history and personality intact for the most part, but she was no longer the daughter of Wonder Woman and Steve Trevor. Power Girl kept most of her original personality intact, but her entire history was retconned. Instead of being the cousin of the Golden Age Superman on Earth-2, she was rewritten as the magical granddaughter of Arion until Geoff Johns reinstated her original Earth-2 history with the 2006 miniseries Infinite Crisis. Of the three, the Huntress received the most radical changes in both history and personality when she was rewritten as the survivor of an assassinated crime family, until her original history as the daughter of Batman and Catwoman was reinstated with with the New 52 reboot in 2011.

As you can imagine, with so many reboots in DC's publishing history, DC characters rarely have a consistent history, let alone consistent character developments. The Huntress in particular has suffered the most from this problem as she is often written out of existence following a major reboot, and then later resurfaces with a completely new history and personality. She also never goes too long with a new history before it gets another soft reboot a few years later by a new writer who wishes to do their own spin on it. What started off as a character who was simply created as the daughter of the Golden Age Batman and Catwoman quickly became a character with one of the most inconsistent and complicated histories in the history of comics. What started off as an initially progressive and well beloved character by DC also quickly became one of the most abused characters by the same publisher, presumably for her status as a character who represents the idea of an emotionally well adjusted and happy Bruce Wayne.

Since it would take forever to discuss all of the differences and similarities between all the different versions of the Huntress we've had from 1977 to the present, I have decided to focus on the original Helena Wayne character that debuted on Earth-2 during the late 1970s, and the current version of her that debuted in 2011 with the New 52. Since I only want to focus on the developments that made the character progressive in both of her incarnations, I will be completely disregarding narratives that abused the character such as Earth-2: World's End and Earth-2: Society as both of these narratives do not offer a good representation of her character. That being said, let's go ahead and compare and contrast the ideas and concepts that made the character progressive between her first and her current incarnations, as well as score their level of progressive development to see which version broke more grounds as a progressive character and which needs improvement.
Posted by Diane Darcy at 09:55