Past and Present: Pre-Crisis Wayne vs New 52 Wayne: Costume Design 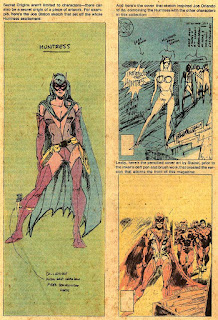 In addition to developing the origin story for the character, it was natural that a costume design had to accompany the character. In 1977, the character's co-creators wanted her to have a costume that was an amalgamation of the Batman and Catwoman costumes. Since Selina Kyle originally had a purple and green colour scheme for her Catwoman costume, purple became the Huntress' signature colour. Her boots, gloves, and mask were all a dark purple hue, while the main torso piece itself comprised of both light and dark shades of purple.


Since blue and grey were Bruce Wayne's signature colours as Batman (for the most part--he originally had a black and grey costume), the only blue that was added to the Huntress costume was the blue scalloped cape that was the same as her father's. To complete her Batman-inspired look, the Huntress mask followed a similar design to her father's Bat-shaped cowl. However, rather than have it completely cover her head, she wore it as a face mask, with only two high peaks extending from the top of the mask. This helped create the silhouette of 'bat ears' whenever she cast a shadow. Since her father also wore a utility belt, the Huntress wore one as well, complete with a bat-stylised 'H' on the belt buckle, and a collapsible pistol crossbow that she sore on her boot.

While the original Huntress costume had a very well thought-out design complete with a consistent colour scheme, it was also not a practical costume as it was designed to present the character as a sexy crime-fighter. Whereas her father was completely covered from head to toe, Helena's original Huntress costume shows quite a bit of skin. Her chest, thighs, and upper arms are very visible, not to mention the sides of her butt are also sometimes visible. Aside from the fact that a costume of this nature doesn't protect against bullets, knives, and other sharp and flammable objects, the choices of where to show skin also draw attention to her more sexual assets. Without a covered chest, Helena's breasts are partially visible. Without any trousers, her bare thighs often draw attention to her crotch area when she's facing us, and the partially visible butt cheeks draws attention to that part of her body when her back is towards us and her cape facing up. In addition to the exposed skin, Helena also wears high heel boots, which make it impossible to fight, run, climb walls, and land on her feet from a high altitude without injuring her ankles along the way.

Given the impracticality and sexualised design of the original Huntress costume, the pre-Crisis Helena Wayne only gets +1 for this section. The +1 is for the overall design and choice of colours, but not something one would wear to fight crime on the streets of Gotham. 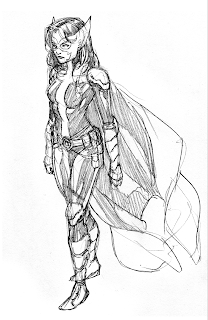 In contrast with the pre-Crisis Earth-2 Catwoman who wore a cat-themed dress, the New 52 Earth-2 Catwoman wore a full body suit complete with a Huntress-styled mask, gauntlets, and a black colour scheme. On the centre of the torso was a pink arrow-shaped stripe that resembled the white cross on the post-Crisis Helena Bertinelli costume.

Also in contrast with the pre-Crisis incarnation, the New 52 Earth-2 Bruce Wayne wore a dark grey and black bat suit that was heavily armoured and complicated to put on.

Out of the two costumes, the new New Helena Wayne's Huntress costume is an exact replica of her mother's Catwoman costume with a few modifications. Her mask is the same as her mother's, but purple in colour instead of black. Her boots, gauntlets, shoulder, knee, and elbow pads are also similar to her mother's in style and texture, but are also purple instead of black. Her suit itself is also a full black body suit made of kevlar instead of leather, and her boots are padded with flat heels instead of high heels. Her cape is also a normal, regular cape that is black on the exterior and sometimes purple in the interior. She also has a white cross-shaped stripe on the torso of her costume that is similar to her mother's, but is in reality brought over from the post-Crisis Helena Bertinelli costume.