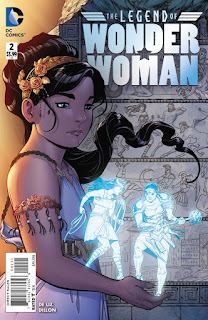 Review: I often times can never find the right words to describe the master work that is Renae De Liz' Wonder Woman. Her scripts are always written with tremendous love and respect for the character, and it all comes through with the amount of thought that goes into her development. De Liz never takes any shortcuts in her writing and goes really in-depth into showing the reader who Diana is as a character. Page after page, Diana is a consistently evolving entity. She's constantly learning, she's constantly failing, and she's constantly changing, which gives a life-like quality to her character. Despite knowing that you're reading about a fictional character, you never feel like you're reading about a drawing on page that happens to be talking. That's an incredible experience considering how rare it's become for me to feel that way about many modern DC Comics narratives. 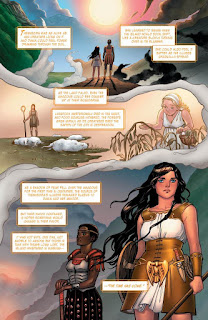 Whereas many DC narratives have succeeded in pigeonholing many of my favourite characters into outdated archetypes in that thing that's passing for a 'mainstream' DC Universe these days, De Liz's Wonder Woman is by contrast a progressive character. She never once reads like a neatly packaged bundle of tropes and stereotypes we associate with warrior women. Instead, her Diana reads like a real human person with real human experiences. Like a real human person, she is presented as having complex feelings about her place in the world she knows, and where she actually sees herself as she grows older. There is this constant internal conflict between what she's expected to do as her mother's heir and what she personally wishes to accomplish.

The character that most succeeds in helping Diana forge her own identity and discover her full potential is Alcippe, who is equally impacted by her presence. Whereas Alcippe is accustomed to the life of an immortal warrior who is bound by duty (and the boredom that comes with that), she acquires a new challenge in the form if Diana. In contrast with the girls she is used to training in the ways of combat, Diana shows a stronger determination to learn, and continues to pick herself up and try again, never giving in to failure--something Alcippe sees too often with her own pupils. The way De Liz has these two women relate and interact with each other not only presents unique challenges for both, but allows both women to grow in a very organic way.

Another relationship that De Liz continues to explore in this issue is the one that exists between Diana and her mother, Queen Hippolyta. There is a lot of mystery surrounding Hippolyta in this one chapter, and the fact that she's very withdrawn and pensive raises questions on whether or not she's more aware of what's happening on Themyscria than she's letting on. Is she equally aware of the darkness that's surrounding Themyscira but doesn't let her daughter know that? Is she aware of her sister's plot to dethrone her and usurp her place as queen? Is she, in her own way, also challenging her daughter's resolve by behaving in ways that contradict her reputation as the glorious warrior queen of the Amazons? I feel like De Liz is planning something big for Hippolyta's character but isn't really making it clear to the reader what that is. It's definitely keeping me intrigued with what's happening with her character. I really do feel like there is more going on with her than what we're being shown by De Liz, and it's making me anxious to see how Hippolyta is going to come out of the corner she's been put in from every angle.

Other characters that have equally piqued my interest are Hippolyta's sisters Antiope and Milanippe. Antiope in particular has taken on a more villainous role in this chapter, and appears to have allied herself with the corrupt god of the underworld, Hades. What is her relationship with Hades at this point in the warrior's life? Has she struck some kind of deal with Hades in exchange for power? Is there more to Antiope's power quest beyond the frustration with living a relatively simple existence away from battle? How much power does she have on Themyscira if even her other sister, Milanippe is afraid to challenge her?

De Liz is developing some interesting plot threads in this second instalment that appear to be building up to a bigger reveal. As soon as one problem surfaces, a couple more begin to emerge. It all starts to escalate as soon as Antiope gets involved, resulting in the loss of Alcippe, who saw Antiope's betrayal coming. What did Alcippe know before Antiope yanked her soul from her body? No one knows, but De Liz nonetheless leaves that plot open for a future chapter, which could reveal more about the darkness that's enveloping Themyscira. A darkness that both Diana and Alcippe were all too willing to take on. 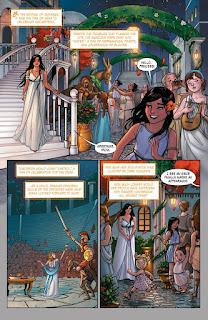 When it comes to world-building, there is a certain magic to the way De Liz imagines Diana's world, the people, and the creatures that reside within it, making it feel like both a paradise island and something out of a Hayao Miyazaki film. (Miyazaki's Mononoke Hime in particular comes mind in the scenes that take place outside of Themysciran society). Diana's world is pure, it's innocent, it's sincere, and of course, De Liz' pages wouldn't be what they are without the contribution of her husband, Ray Dillon.

While De Liz creates the fantastical imagery with her pencils and prose, Dillon brings it all to life through his use of colour, inks, and lettering, effectively creating the tone and atmosphere of Themyscira. This is all going to be important later on when Diana finds herself in the outside world and experiences (for the first time) the culture shock that all of us experience when we enter a society and culture that is vastly different from the one we're familiar with. Whereas Themyscira is a world full of wonder and fantasy, the outside world is anything but ideal, and the harsh realities that come with that will surely shake things up for Diana. All of the setup here is building up to that moment.

On the whole, I feel that De Liz and Dillon are creating a modern epic with Legend of Wonder Woman. The characters are complex and engaging, and the world they reside in strikes a nice balance between fantasy and realism. It's certainly creating a lasting impression on me as a reader who enjoys narratives about complex human beings embarking on personal journeys and seeing them grow in meaningful ways. I don't just like seeing people do stuff in a story, I like feeling like I am part of the experience as well. I like feeling like I am part of the journey that these characters embark on, and De Liz and Dillon do succeed in fully immersing me into the world they're creating. It is escapism done right, effectively making Legend of Wonder Woman one of the best comics DC is publishing.