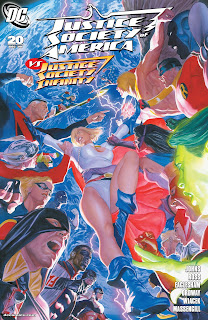 I've had several people tweet me about this today, so I guess I might as well talk about it. As is par for the course, Bleeding Cool loves rumours. Sometimes they're right, sometimes they're sort of right, and other times rumours are just rumours. With DC recently revealing their Rebirth initiative for this year, naturally, Bleeding Cool has been pursuing rumours like little kids on an Easter egg hunt. One of the ones they revealed today was a revival of the Justice Society of America title with the following description:

Currently in the New 52, there was no Justice Society in the forties fighting in World War II. The analogous team fought on Earth 2 instead. But now, not only will this active team of superheroes be revealed, along with an explanation as to why no one remembers them, but they will be brought forward, young, to the present days, fishes out of water, fighting alongside the Justice League of America. Their presence may also tie into the changing realities that the member of Titans Hunt are experiencing, remembering memories of each other that never were…

Now, I want to be clear that this is ONLY a rumour and that nothing is set in stone yet. I'm someone who always waits for DC to give official word on their new projects before I actually discuss them. However, IF true (and this is a big IF here), this doesn't begin to solve the problems with the Justice Society franchise they torpedoed on Earth-2.

To begin with, another Justice Society comprised of young people from the 1940s that are time displaced continues to miss the point about what fans loved about the original Justice Society, which was age diversity. People actually loved that these characters were allowed to age naturally and be in a different place in their lives by the time the Justice League emerged (either on Earth-1 or Earth-0). At best, establishing Alan Scott and Jay Garrick as predating Hal Jordan and Barry Allen on the mainstream universe may reinstate their original status quo of being the first Green Lantern and Flash. However, by time displacing them to the present robs them of their age and experience, and therefore does nothing to reinstate the concept of legacy to the Justice Society. They'll just be another Justice League with a different name. Additionally, by keeping them young, we could--yet again--run into the same problems with characterisation most of us had with the current Earth-2 versions.

The other problem with establishing an Earth-0/time-displaced/young Justice Society is that we will--once again--not get legacy characters like Jade and Obsidian (Alan Scott's kids), Nuklon (Al Pratt's godson), and Hector Hall (Carter and Shiera Hall's son), at least not without major retconning. Additionally, without the existence of a Golden Age Bruce Wayne, Clark Kent, and Diana Prince (the original Batman, Superman, and Wonder Woman respectively), we also can't get Helena Wayne as the Huntress, an older Kara Zor-L as Power Girl, and Hippolyta Trevor as Fury, without doing some major retconning once again. (Something that proved VERY problematic for all three characters post-Crisis). 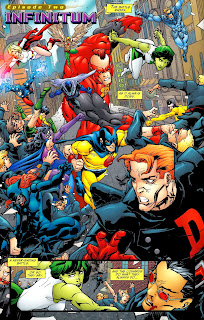 In this particular case, if this rumour does in fact become reality, DC will once again fail salvage the Justice Society franchise with an appropriate solution. They'll fail because they'll only be reinforcing the same problem as before, just on a new Earth. If this new Justice Society is additionally under the same incompetent editorial umbrella that torpedoed the originally successful Earth-2 franchise with Earth-2: World's End, there is no guarantee that the right creators will be attached to this new title, or that the direction will actually be a solid one. Instead, this will just be a new case of DC throwing new shit on the wall to see if it'll stick this time without actually learning why the last shit they flung didn't stick.

I really do hope DC has a more solid plan than this for fixing the Earth-2 Justice Society franchise, and that this is nothing more than a rumour. Personally, I still think they should just reboot the current Earth-2 completely, and simply develop this world and characters more closely to the pre-Crisis original, as opposed to making a bigger mess of this still new continuity. Because here's the other danger of DC getting this wrong a third time: if Rebirth fails, DC literally has no more chances left to recover from plummeting sales without doing a complete overhaul of their management and intellectual properties. If worse comes to worse, DC will sooner find themselves filing for bankruptcy the way Marvel did twenty years ago, before they see even a spark of their competitor's more recent success.

Rebooting an entire mythological universe that is decades old with a large and devoted fan following is a risky enough gamble. Not only does DC risk losing customers who have been buying DC products for decades, but if not done correctly, a reboot that is neither carefully planned nor tactfully executed can do more than just damage the foundations of decades old properties. It can result in the loss of both older and newer readers once they start losing confidence in the publisher being able to put out a quality product. It also hurts retailers in a very big way because they don't just lose money investing in a product that is not selling--they also lose confidence about preordering new titles if they don't know how they will sell at their shop. That is the hole that DC dug themselves into in the last four years, which is why they can't get this latest relaunch wrong.

Contrary to popular opinion, I DON'T actually want DC to fail. I really do want DC to get their shit together and come up with a genuinely solid plan that can lead to longterm success before it gets to the worst case scenario. But if their structure and business model don't change for the better, they will inevitably continue to set themselves up for failure in a way they won't easily recover from. The latter situation is what I DON'T want to see happen because it'll be an even riskier gamble once a bank or a new investor gets involved to bail them out.