Past and Present: Pre-Crisis Wayne vs New 52 Wayne: Afterthoughts 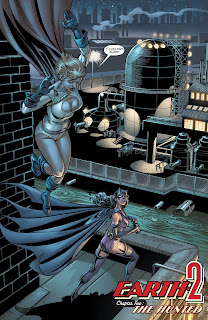 As a character, the pre-Crisis Helena Wayne was allowed to be a more established individual, complete with a higher level education and a career. She was also given her own methods as a superhero that were inspired by her parents, but were ultimately her own. She was allowed to have her own identity (both as a civilian and as a superhero), and she had her own personality, complete with her own unusual quirks. She was also allowed to age and change as she got older, and she was allowed to be flawed as an individual. For the most part, she upheld the same values as her parents and other superheroes like herself, but was also not beyond making exceptions to her own rules.

Where the pre-Crisis Helena Wayne fell short on was on the front of more broad diverse representation. While she definitely gave women strong representation and challenged many existing stereotypes about women, she also had nothing else going for her. She was very much characterised as a heterosexual character, and had no other ethnicities established as part of her identity.

When it came to the New 52 Helena Wayne, the near polar opposite phenomenon was observed. As a consequence of a less progressive leadership at today's DC Entertainment, the New 52 Helena Wayne fell regrettably short on the front of meaningful character development, and her story was constantly usurped by white male characters that did not earn or deserve her narrative.

Interestingly though, the New 52 Helena Wayne had a bit more going for her on the front of more diverse representation. Compared to the past, the New 52 Helena Wayne was drawn with a less anglo-saxon appearance and had a specifically Latina looking face very early on. On the front of sexuality, she was often characterised in ways that could be easily interpreted as bisexual behaviour. The only thing that kept her from getting full points on this front is the fact that none of these establishments were ever explored by her writers.

It was never confirmed if the New 52 Earth-2 Selina Kyle had a similar background to the pre-Flashpoint version (who was half Latina), effectively making the current Helena Wayne character a quarter Latina. Additionally, when it came to Helena Wayne's relationship to Kara Zor-L in the New 52, her writers consistently denied that these two women were anything more than friends, which effectively made the lesbian subtext between them feel like a case of queerbaiting. On the front of female representation, the New 52 Helena Wayne had nearly the same developments as her pre-Crisis counterpart as the Huntress, but fell incredibly short on the 'Helena Wayne' side of her character.

With DC's Rebirth initiative later this year, if DC took the best aspects of the pre-Crisis Helena Wayne and combined those with the more progressive aspects of the New 52 Helena Wayne, we could end up with an even better version of the character yet. It would be a case of combining the old with the new and ending up with a version of Helena Wayne that feels recognisable to fans who have read her stories from the pre-Crisis era, but still be accessible to newer, more diverse fans who only met the character with the New 52 reboot.

Good representation absolutely matters for the longterm success of any DC character, and accessibility to both new and older readers is crucial for fans maintaining interest in her character and continuing to invest in her. Under a stronger leadership at DC Entertainment, it can be achieved. All it takes is for someone at DC to recognise the character's full potential and actually do something with it.
Posted by Diane Darcy at 15:31