Past and Present: Pre-Crisis Wayne vs New 52 Wayne: Heroism 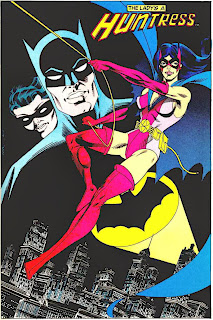 When the pre-Crisis Helena Wayne embarked on her first case as the Huntress, it was to catch her mother's killer when she was only 19 years old. As stated in the previous post, prior to her mother's tragic death at the hands of a former henchman from her Catwoman days, Helena had no interest in taking over the family business. Once she got a taste of the superhero lifestyle, however, it became her passion. More than she was driven by a strong desire for vengeance, she was more driven by a desire to uphold her father's legacy and a strong desire to help others.

From the moment she donned her costume, the pre-Crisis Helena demonstrated a mastery of breaking and entering (something she clearly got from her mother), and proved herself to be a very thorough and meticulous detective. No detail ever went unnoticed by her, nor did she ever ignore the fact that she constantly broke the law in pursuit of justice despite being a legal counsel. She consistently reminded herself of the fact and even questioned why she bothered going to law school if she was going to fail to uphold the law herself. Still, she rationalised that it was all for a good cause.

During her first years as the Huntress, the pre-Crisis Helena was depicted as a determined and competent crimefighter, but wasn't presented as an expert on the first few tries. Despite strong confidence in her abilities, the pre-Crisis Huntress did make mistakes, was often captured, and sometimes even got her enemies killed by accident. When she made basic errors in judgment, she reflected on them and learned from them. When captured, she relied on her intelligence to get out of whatever dangerous situation she got herself into. When she accidentally killed her enemies, she thought about how she felt about it, acknowledged that it was wrong to take a life, but didn't always feel bad about murderers dying.

When she joined the Justice Society within that same first year as the Huntress, the pre-Crisis Helena proved herself to be a team player and demonstrated strong leadership skills. In her first team-up with Wildcat and the Star-Spangled Kid, she was quick to assess situations and command the people she was with. She also showed that she was capable of improvising whenever situations changed against her favour, and knew when to retreat. Whenever she partnered with either the Earth-2 Dick Grayson or the Earth-1 Bruce Wayne during Justice League/Justice Society crossovers, she always fought alongside them as equals and never felt the need to compete or prove herself to them. Whenever she felt condescended by senior members of both the Justice Society and Justice League, she always made them self-conscious of their behaviour, but never held any grudges. Of all the Justice Society heroes, she struck a friendship with Kara Zor-L (Power Girl), who became one of her frequent partners and most cherished friendships.

As the pre-Crisis Helena Wayne got older (which on the pre-Crisis Earth-2 happened in real time) and became a more seasoned crimefighter, there were very visible transitions with her character. For one, she became better at what she did and made a lot less mistakes than in the beginning. She was more efficient at investigating 'special cases' and capturing dangerous criminals, and she especially became one of the most feared individuals in Gotham. At the same time that she was building a formidable reputation for herself in Gotham, her adventures as the Huntress were also starting to take their toll on her well-being. One of the most visible transitions we saw with the character (most notably towards the end of Paul Levitz' run and the start of Joey Cavalieri's take on her) is the fact that she became increasingly violent in her methods and was not beyond threatening to kill anyone who threatened the lives of the people she loved. She also became more withdrawn from the people in her life, and was noticeably less sympathetic towards individuals who committed crime. She also started employing more harmful ways of getting criminals to talk.

One the of the reasons explored for why Helena was becoming more brusque in her fighting style is the fact that she was rarely taken seriously by men due to her gender. Despite having a strong reputation as a fearsome crimefighter right up there with Batman (her father), often times male criminals (especially crime bosses) thought that they could easily overpower her and never thought of her as a dangerous threat. As such, Helena would often beat these men unconscious as a way of showing that she was fully capable of taking them down, and even get them to respect her. It wasn't until she thought she had accidentally killed a petty bank robber as consequence of using deadly force that she started to reflect on her methods and why she was doing things the way that she was. She started thinking about her career, her relationships, and whether or not she was taking her pursuit of justice too far. She also started thinking about whether or not she was enjoying hurting people and if she was starting to succumb to the darker aspects of her personality the same way her mother did when she was Catwoman. A combination of all of these things got her to seek psychiatric help, but unfortunately died during the events of Crisis on Infinite Earths before she had the chance to resolve those issues. 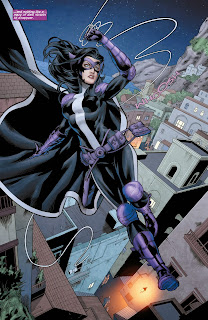 In the current continuity, the New 52 Helena Wayne retained many of the same heroic traits as the pre-Crisis version, with the difference that we saw less natural transitions with her character and her motivation as a hero was less firmly established.

As a child, Helena mostly gained experience by fighting alongside her mother, Selina Kyle. Selina mostly tasked herself with training Helena, and often brought Helena with her on the various cases she took on. As Robin, Helena proved herself to be a pretty snarky crimefighter, and was particularly raw in her fighting style to the point of worrying her father, Bruce. A lot of times, Helena had no qualms about hurting criminals pretty badly and was known to impale them with any sharp object that she threw at them. When her mother was killed sometime later, Helena recklessly confronted her mother's killers and was only saved when her future best friend, Kara Zor-L (then known as Supergirl) intervened and got her out of that dangerous situation. Between the time of her mother's death and the time her father died ending the Apokolips War on Earth-2, Helena became obsessed with hurting criminals, which made Bruce very uncomfortable. The only reason he allowed her to fight alongside him was so that he could keep an eye on her and keep her 'violence high' in check.

By the time Helena ended up on Earth-0 following the events of the first Apokolips war, she was still pretty raw in her fighting style when she started operating as the Huntress at the age of 17. It wasn't until she grew up a little that she started employing more sophisticated methods of crimefighting. By the time she was 22, she became a more nuanced detective and only used violence when she had to. By then, it was less about the thrill of beating someone up and it became her way of maintaining control of dangerous situations. She was also less eager to kill by this point in her life, only reserving that decision for criminals she considered too dangerous to keep alive. In the remaining time she had left on Earth-0, the New 52 Helena mostly preoccupied herself with taking down sex trafficking rings and small time criminals. For the bigger threats, she often partnered up with her friend Kara (who was now going by the name of Power Girl) and often combined their skills to contain dangerous foes.

Despite a more fleshed out history for the New 52 Helena, a lot of her character developments as a superhero didn't so much feel like a natural progression of things, and felt more like an attempt to darken her character in order to sell her as 'edgy' to a cynical male readership. For example, why did Helena get a kick from hurting criminals badly as a young Robin before she actually had a reason to do so? Why did she feel it was necessary to prove herself to her parents in this way as opposed to showcasing her detective skills and demonstrating her ability to solve crime cases using her intelligence and self-confidence? Why were there no visible changes in her fighting style between the time the Apokolips war claimed the lives of both of her parents and the time she took on the identity of the Huntress until five years later?

I would think that a teenage girl who had just lost her parents (and world) would spend more time reflecting on all the events leading to this drastic change in her life, and figuring out her place in a new world that has its own versions of her parents. I would also think that she would be more angry at Apokolips for destroying her life and not getting much satisfaction from beating petty criminals. We also didn't see what factored into her growth as a heroine by the time she arrived to Earth-0 and the time she took out a sex trafficking ring in Italy at the age of 22. Worse yet, the character hadn't undergone any major character transformations or meaningful character growth since that sex trafficking case in Italy, and nothing more was done with her character since she returned to Earth-2.

Without a solid direction or any real desire to truly develop the character on DC's part, the New 52 Helena Wayne left a lot to be desired. At best, a few interesting ideas were put in place such as the fact that she started out as her parents' Robin before graduating into her more iconic identity of the Huntress. The problem is DC did nearly nothing with those developments in the current continuity, preferring to sell usuper Batmen as her father's successors on Earth-2, effectively robbing her of those meaningful character developments. As such, the New 52 Helena had very little going for her on this front and fell incredibly short in realising her full potential the way the pre-Crisis version did. As such, the New 52 Helena only gets +1 for this section.