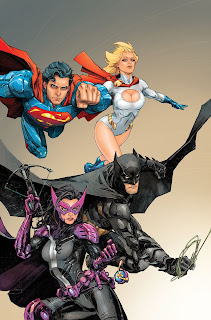 DC Comics announced today the titles they have slated for their Rebirth relaunch later this year, and amongst the titles getting a 'rebirth' is Earth-2. Also today, Geoff Johns elaborated more on DC's mission statement with Rebirth, with an emphasis on getting 'back to basics' with what makes the DC Universe what it is and its characters who they are. Similar to how the Green Lantern and Flash Rebirths were handled pre-Flashpoint, we can expect some sort of revival of old concepts while still telling new and modern stories with DC characters. Johns also made a point of emphasising how valuable every DC character is to both the DC Universe and to every fan who's been fortunate to get to know them. He does want to find a place for each of them moving forward.

We obviously don't know the details of what kind of stories to expect later in the year, but I do like what I hear so far. I am at least happy to know DC hasn't given up on Earth-2 at all, and I hope that the new Earth-2 that debuts in the fall discards Earth-2: World's End completely to allow these characters to start fresh on their original Earth without any of that baggage. I don't know what this will mean for Huntress and Power Girl, or the rest of the Justice Society characters for that matter, but I am interested in finding what plans DC has for them moving forward. I don't want to jump into the speculation bandwagon just yet.

At best, we do know from the information available that Geoff Johns acknowledges Barbara, Dinah, and Helena as the 'core' of the Birds of Prey. What we don't know is which versions of these characters DC will use for their relaunch. We do know from the title at least that Barbara Gordon will still be Batgirl, and that Dinah Drake may still be the Black Canary for the title, given her recent adventures with Barbara. But will the Helena fronting this title be the New 52 Helena Bertinelli who debuted in Grayson, effectively reuniting the original team? Or, considering that there's only one Huntress in the DC Universe right now, will DC decide to bring Helena Wayne back to the mainstream universe so that the Birds have the Huntress as a member of the team? If the latter, does this mean the Earth-2 Power Girl will be returning to the mainstream universe as well? Will she still be a partner to the Huntress? (In my opinion, I do think they should go with Bertinelli since the Birds is more her family, and Wayne is more of a JSAer than not).

If the Earth-2 Huntress and Power Girl do stay on Earth-2 for the relaunch of that title, will they finally be written as the legitimate successors of the Bruce Wayne and Clark Kent of this world? Will they finally be appearing on covers and solicitations? Will they finally be written with care and respect and not as extensions of male characters usurping their stories? Will we similarly get a more recognisable Justice Society fronted by recognisable versions of Alan Scott and Jay Garrick? Will we also see the return of Kent Nelson, the original Doctor Fate? How about the Infinitors? (In my opinion, the new Earth-2 should be developed more closely to the pre-Crisis original in concept).

There are a lot of things to be excited about with these new announcements, but it's not time to celebrate just yet. In addition to reinstating the DC Universe to a more recognisable status quo that is inviting of both new and old readers, it also matters who DC attaches to these new titles. One thing DC has consistently failed at with both the New 52 and DCYou initiatives is hiring the right editors and creators to diverse books that should be inclusive of diverse readers. This has been a persistent problem with the Superman, Wonder Woman, and Earth-2 lines in particular, with a lot of internalised misogyny at the editorial level influencing the largely bad directions for these franchises.

One thing that definitely needs to change for these titles moving forward is hiring new (preferably diverse) editors who actually embrace the conceptual originality of these properties, and want to tell meaningful stories with these characters. The priorities of the editors themselves will often factor into the creative teams they hire, and it absolutely does matter that they hire the right people to develop these characters. (We definitely want to avoid another Meredith Finch and Daniel H. Wilson situation). There also needs to be less preoccupation with telling dark, mean-spirited stories that piss off readers (like Earth-2: World's End), and there needs to be more emphasis on world-building and meaningful character development. As readers, we need to feel like investing in these characters and narratives will be worth our time and money in the long-term. We definitely want stories that we can revisit time and again like we often do with more Classic DC stories.

I do hope that a lot was taken into consideration with Rebirth, especially with the abysmal reputation DC acquired over the last five years, most of which fall heavily on DC's editorial and co-publishers. As I said in the previous post discussing Rebirth, I do want DC Comics to succeed, and I want them to regain the trust of their readers again. But it all boils down to them making smarter decisions than in the last five years, and choosing better people to develop their stories and characters. All of that matters for the longterm success of DC.
Posted by Diane Darcy at 20:01