Past and Present: Pre-Crisis Wayne vs New 52 Wayne: Character Development 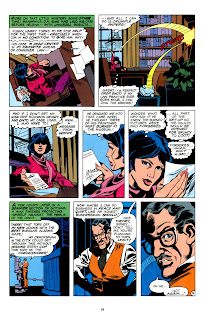 The character evolution of Helena Wayne pre-Crisis was an interesting one. How she changed from the time she made her debut in the late 1970s to the time Crisis on Infinite Earths rebooted the DC Universe in the mid-1980s reflected a rapidly changing comics culture. The first time we met Helena Wayne in the pages of All-Star Comics #69 and DC Super-Stars #17, we were introduced to a smart, confident, and outgoing young woman who persevered in every aspect of her life. She was just as passionate about justice in her Helena Wayne persona as she was as the Huntress.

Prior to her superhero career, Helena was famous for her athletic prowess and academic achievement. She excelled at sports (especially gymnastics), and she was a straight-A student. She graduated valedictorian from one of the highest profile universities in America--Harvard University--and she pursued a successful career in law.

Despite having superheroes for parents, Helena originally (and quite ironically) had no interest in pursuing a superhero career of her own. She figured that practising law by itself would honour and continue the work that her father started, and it wasn't until her mother's past as Catwoman caught up to her that she reconsidered this position. Once she had a taste of the lifestyle her father once endeavoured, she soon realised that--as talented as she was in her own profession--she could actually do more to protect her city as a costumed hero than as an attorney. As the daughter of Bruce Wayne and Selina Kyle, she already possessed the right resources and the right set of skills to actually prevent crime. As such, she found more fulfilment in stopping a crime from happening than waiting for it to happen.

Personality-wise, the pre-Crisis Helena Wayne was full of charm, elegance, and was quite sarcastic. She was recognised for her unusual quirks, her wicked sense of humour, and she was incredibly self-confident--sometimes to the point of arrogance. Around other people she was quite friendly and affectionate, but she was also assertive when she needed to be. She was never fond of cowardice and always tore down people who lacked the courage to do the right thing. She was also compassionate towards others, but not necessarily merciful towards people who harmed vulnerable individuals. It wasn't until Helena became a more seasoned crime-fighter that she started becoming more withdrawn and less friendly than when she first started out, and most of that reflected in her Huntress persona later on in her crime-fighting career.

Given the largely positive developments for the pre-Crisis Helena Wayne, she gets +2 for this section. 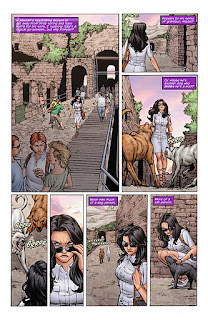 One major difference from her pre-Crisis counterpart, however, is that despite the work she did as the Huntress, the New 52 Helena was ironically less interested in interacting with other people, except for when it was actually convenient for her. Unlike the pre-Crisis Helena who actually liked being around other people, the New 52 Helena tended to avoid people as much as possible. Whenever she had to interact with someone other than Kara (her best friend), she would put on her 'outgoing Helena Wayne' persona, but when it came down to business, her 'Huntress' persona tended to dominate. I would say more than 'Helena Wayne' was ever present, the New 52 Helena was more '100% Huntress' both in and out of costume, with no desire to pursue a career or any other endeavour for that matter.

Another major difference between the pre-Crisis Helena and the New 52 Helena is the fact that the latter had considerably less respect for other people, including the Earth-0 Bruce Wayne whom she constantly stole from. She also didn't seem bothered by the fact that she stole other people's identities, and was particularly nonchalant in the way she discarded her 'Helena Bertinelli' identity. She was also not always kind to the people she was close to, like Kara, whom she was often rude to. When it came to returning to Earth-2, the New 52 Helena proved to be something of a coward, which was very unusual when you consider she had already faced extremely dangerous situations throughout her lifetime.

While the New 52 Helena Wayne did retain some of the same personality traits as her pre-Crisis counterpart, on the front of overall character development, the New 52 Helena is a much weaker character than the one who preceded her. Whereas the pre-Crisis Helena always strived to better herself, the New 52 Helena seemed to be sorely lacking on this front, and does not appear to have any other interests than being the Huntress. While lacking an interest in human relationships isn't necessarily bad in itself, she still loses points on the front of how she treats other people, especially ones who are (or should be) important to her. (Will be discussed in more detail in another post).

Given the regressive changes that were made to Helena's character for the New 52 continuity, this version of the character only gets +1 for this section.