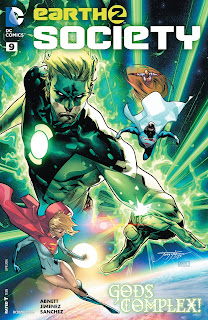 Summary: In the new technologically advanced city of Amazonia, Kendra Muñoz-Saunders watches as the new Amazonian queen, Fury, trains the new Amazons in the ways of combat in preparation for impending war. Kendra asks Fury if she plans to start a war and Fury answers that she doesn't, but would like to end it should one arise. Fury then asks Kendra why she's always alone and Kendra responds that she prefers solitude to having people stare at her for her giant wings. Fury sympathises, but Kendra has questions of her own: why is her city hidden from everyone else? Fury responds that it is due to the Amazons' status of being feared and not wanting to subject them to the same fear and corruption that is destroying the other colonial cities. Kendra believes that they must all work together to create a more unified society, but Fury doesn't believe neither the Green Lantern nor the World Army has what it takes to lead. She believes that the survivors of Earth-2 need the Amazons to guide them, given their culture is rooted in wisdom and have experience in governance. Kendra then asks what happened to the survivors of her ship. Fury says that they all died and the new Amazons took their place. Exactly what this means isn't entirely clear.

Back on the surface, war has erupted between Erebus City and Ark Home. The world army has dispatched various individuals to try to diffuse the situation. Khalid Ben-Hassin was sent to Ark Home to press for negotiations, Helena Wayne was sent to Erebus to also negotiate with its leaders, and Kara Zor-L was sent to stop an actual battle from taking place at Clearwater Valley. In Neotropolis, Alan Scott and Red Tornado are looking to pen a new constitution to help create a more unified society. Alan believes that Red Tornado is the best person for the job of penning the new constitution since she possesses the personality and insight of the deceased Lois Lane. Back in Clearwater Valley, Kara succeeds in diffusing the situation, but is left with more monsters to fight--monsters similar to the one both she and Helena fought the day before. Alan immediately departs Neotropolis to assist her. Alan subsequently informs Kara that while the monsters were created in a similar fashion to the ones from the terraforming accident, they were in fact created deliberately to wreak havoc. Who created them, however, remains unknown.

In New Gotham, Dick Grayson is seen running some tests on the power reserves that are being sold in the black market at Wayne Tower. He concludes that the power reserves Nimbus is racketeering are actually radioactive and lethal, and recruits both Ted Grant and Oliver Queen to help him take down Nimbus. In another corner of Earth-2, Val-Zod, Jay Garrick, and Henry Heywood Jr., are conducting tests on the frontier highland region and conclude that there are no oil reserves on this region. Further research also confirmed that the planet they colonised has absolutely no natural resources of any kind and is in fact an imitation Earth. Exteriorly, the planet appears to be pluming with life, but in reality, the planet is barren and won't sustain human life for very long. 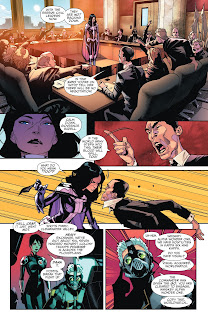 Review: Two issues into Dan Abnett's first story arc and it is quickly nullifying the first seven issues of Earth-2: Society as a complete waste of everyone's time. Within two issues, Abnett addressed the biggest question that was most important for the first story arc of this series: does the new planet the Earth-2 survivors colonised have any natural resources?

The existence of natural resources is at the heart and centre of the main conflict of this narrative, and keeps in continuity with what was established of this planet during Convergence. Without the existence of natural resources, the Earth-2 survivors are very much stuck with the ones they already have from the old Earth, and their scarcity is what is leading to the eruption of war amongst all the colonies. It does create a believable premise for the Earth-2 survivors to be in conflict with each other, and everyone is being driven by a strong desire to survive. It especially creates bigger problems for the Earth-2 heroes to contain, mainly because the Earth-2 survivors blame them for the loss of the old Earth. Additionally, any intervention from them can be easily seen as a fight for power, which can escalate problems further.

The kinds of issues Abnett brings to the forefront with this story does raise the question of what the Earth-2 heroes need to do to rectify an impossible situation. The conflict Abnett presents here is actually appropriate for the story arc Daniel H. Wilson attempted to develop during his run, but completely squandered that narrative when he couldn't figure out how to effectively develop that idea. The question from the previous story arc of whether or not to terraform the new planet into the old Earth is relevant here because the conflict matches the first available solution, which was the source vault. The whole point of the source vault's existence was to create a new habitable home for the Earth-2 survivors.

If the decision to use the source vault boiled down to completely restructuring the planet to facilitate the sustenance of human life, or using it to travel back in time to undo the events leading up to the first Apokolips war that killed the original trinity of Batman, Superman, and Wonder Woman, the story arc surrounding the source vault could've actually led to some compelling storytelling. It could've even led to a soft rebooting of Earth-2 to not only undo the disgraceful Earth-2: World's End story that everyone hated, but could've given the characters the fresh start that they needed to have their stories properly told.

Without the Apokolips war to define the fate of Earth-2 and its respective characters, what stories could be told with them? Would we have seen the formation of the Justice Society on this Earth? Would the original trinity have retired to allow their heirs to succeed them? Would Helena Wayne and Kara Zor-L been more closely developed to their pre-Crisis counterparts? Would Dick Grayson and Val-Zod been introduced as true additions to the Bat and Super narratives, and not as gimmicks to sell comics at the complete expense of the female heirs of Bruce and Clark? Would Alan Scott been more closely developed to his pre-Flashpoint counterpart, complete with his two children Jenny-Lynn Hayden and Todd Rice? Would Fury been developed as the daughter of Wonder Woman and Steve Trevor? Would Hawkgirl's narrative have led to the reintroduction of Shiera and Carter Hall as her supporting cast? Would Jay have been developed more closely to his previous incarnation, complete with Joan Williams at his side? 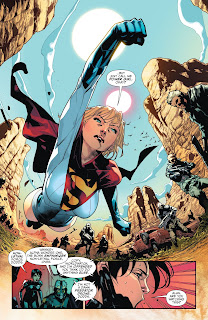 Whatever the plans are for DC's Rebirth later this year, Abnett is certainly creating a narrative that could potentially lead to a complete rebirth of Earth-2, assuming DC hasn't decided to abandon this universe completely. The in-narrative establishment that this imitation Earth is not sustainable does give me hope that a deus ex machina is in the works that could potentially reverse the damaging storylines that caused Earth-2 to tank in sales.

Overall, I really don't have any complaints about this story arc other than the ones I've already had before, which were the editorially mandated fuck-ups. Under Abnett, the characters are actually starting to read more like the characters we know, with Power Girl and Huntress in particular being significant improvements over what we've seen in the last four years. Helena, for example, is being written into a larger leadership role that in some ways call back to her past as a lawyer on the pre-Crisis Earth-2. That scene with her holding a meeting in Erebus City to negotiate a better solution to the resource problem reminded me of her scenes in the US Supreme Court from the 1984 miniseries America vs the Justice Society. I only wish that her scene in this issue was further fleshed out. (I also still want that scar removed from her face).

I also like that Power Girl is finally being characterised more closely to the pre-Flashpoint version: intelligent, competent, independent, and funny, which is how I like my Earth-2 Kara. Dick Grayson is also being better characterised under Abnett, even though his current narrative still doesn't match the new history he's been given. At best, Abnett does hint that Dick has an existing relationship with Helena Wayne since he does have access to Wayne Tower, and is friends with the same people she's friends with. But until we see these two characters interact, this new version of Dick will never truly feel like a legitimate successor to Bruce. We still need to learn if Helena has mentored him in the first year that they made planetfall, and if she in fact left him in charge of looking after Gotham City whenever she has to diffuse conflicts that require her level of experience. There's also still the issue of 'what the hell happened to Dick Grayson's son?' Will he resurface eventually, or as DC editorial decided to drop that character and storyline completely?

Kendra and Fury are also given more page space in this issue, with Kendra being developed more closely to the character Robinson was developing back in 2012. Even Fury is being written more like a daughter who was actually raised by Wonder Woman, even though I still hate that DC retconned Steve Trevor as her father, which was reacknowledged in this issue. (Just the thought of someone at DC actually pairing Wonder Woman with Steppenwolf--of all people--grosses me out worse than whoever decided to pair Wonder Woman off with Superman on Earth-0. Probably the same editor, Eddie Berganza, now that I think about it). The only character that I feel is still suffering on the front of characterisation is Alan Scott who still reads like Doctor Manhattan. At best, Abnett is keeping in continuity with what's been established so far, and is even meta on his god status, but I still miss the more classic Alan Scott personality.

The only other thing this comic suffers from is the fact that there isn't enough page space to contain a large cast of characters--an issue I addressed in the last review. As such--aside from Fury and Kendra--most of the characters don't get a whole lot of page space, with some not even getting enough panel space like Khalid and the Flash. But that's about it really. The rest of the issue is solid on the front of story, character development, and art. One of the things I continue to enjoy from this series is Jorge Jiménez energetic art style, coupled with Alejandro Sanchez' colours, which succeed in breathing life into these characters.