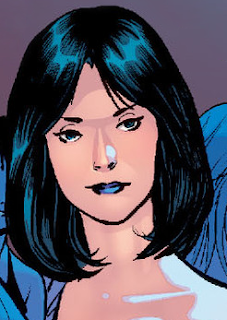 Barry Kitson is a comic book artist from England most famous for his work at Marvel. Like Yildiray Cinar, Kitson hasn't had many opportunities to draw the Huntress on page, but the few that he did for Worlds' Finest #11 left me intrigued nonetheless.

The first thing that stood out to me about Kitson was his light use of contours and shadowing, which grants the right colourist the opportunity to bring out the details of the scenery (such as depth and lighting) through the use of colour. Not only does it make the image look very crisp and clear, but it also prevents making the images look content-heavy.

Another thing that stood out to me about Kitson was his use of body language and expression. Going back to my affinity for artists who strive for anatomic correctness, Kitson also makes Helena's body look natural and doesn't exaggerate any of her body parts to make her more sexual. He similarly doesn't pose Helena in back-breaking or cheesecake poses, which is always great to see.

My only complaint about the way Kitson draws Helena is that she looks a bit too skinny for a woman who climbs walls, cliffs, and swings across rooftops, all of which require significant upper body strength to achieve. As such, I do feel she should have considerably more muscle mass in her arms and torso because, believe me, you cannot achieve any of the things that she does with a smaller muscle mass and not injure yourself in the process. Similarly she should have more muscle mass in her legs as well to assist with climbing ropes and other rough surfaces--two things that she also does.

On the front of facial expression, Kitson does excellent in capturing Helena's personality and attitude. Like Staton and Cinar, Kitson is also very versatile in his use of facial expression and succeeds at capturing the right emotion that the script demands. His Helena is typically depicted as someone who is focused and assertive, which is logical for her character, but he also captures her playfulness, sarcasm, and charm as well.

While it is unfortunate that Kitson wasn't given the entire issue to draw as originally solicited, his handle on the Huntress was very spot on in the few pages that he did, and like Cinar, I hope he gets the chance to draw more comics that feature her in the future.