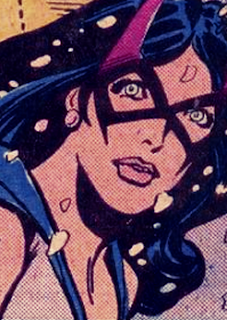 Jim Aparo was an American comic book artist who worked for both Charlton and DC Comics between the early 1960s to the early 2000s until his death in 2005. While Aparo has worked on a wide variety of works, he is most famous for his work on Batman which is where he got to draw the Huntress in the pre-Crisis continuity.

Like most of the artists on this list so far, one of the first things that stood out to me right away about Jim Aparo was his realistic rendition of comic book characters in a way that went almost unparalleled with some of his contemporaries. While most comic book artists even in the pre-Crisis days tended to give their male superheroes very bulky bodies (though not as exaggerated as today), Aparo tended to give Batman a muscular build but lean look that's believable for a man who isn't a championship body builder. Similarly, he tended to draw women with natural-looking bodies and was skilled at drawing different body types and faces.
On the subject of faces, Aparo would appear at times to base the look of a character on a famous Hollywood actor. His Bruce Wayne for example often resembled James Stewart, an American film actor from the 1930s-1950s most famous for his role in It's a Wonderful Life. Whether or not his Helena Wayne was modelled after anyone famous is unknown, but he did retain the look Joe Staton already established for the character, but with smoother renditions of her face and body. His Helena was also drawn in natural poses feasible for a human body and was never sexualised to appeal to the male gaze even if her original costume was designed for that purpose.
On the front of body language and facial expression, Aparo also had a very strong handle on both. His Helena Wayne retained the same charm and confidence as Staton's rendition, and he was equally versatile in his use of facial expression. In addition to always appearing happy, his Helena could also appear sad, shocked, sympathetic, and serious when the scene demanded those things. I have never seen Aparo draw Helena as ever looking angry, but he was nevertheless successful at capturing her momentum and fierceness during action sequences, and he was especially skilled at capturing her sarcasm and wit, two of her most recognisable character traits.
The last thing that appealed to me about Jim Aparo's style was his light and smooth contours. Like the previous artists before him, Aparo had a good sense of lighting and shadowing, and did not overdo it on the line work. He had a very good balance between the two things which led to a crisp and clear rendition of the characters in an era when photoshop didn't had any 'special effects' to the images.
While Crisis on Infinite Earths cut the Huntress' life as Helena Wayne tragically short and prevented Aparo from drawing more stories featuring her, he did nonetheless get to draw some of the best (and frankly some of my favourite) Huntress and Batman stories during her short lifespan.
Tomorrow: George Pérez!
Posted by Diane Darcy at 17:30