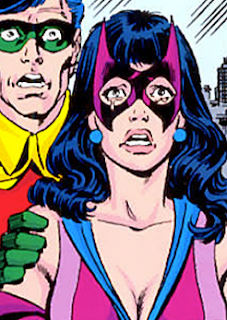 After spending the last four posts discussing four major talents in the comic book industry, we now get to discuss a legend who has worked for both Marvel and DC Comics for a little over three decades: George Pérez!

Straight out of Puerto Rico and into the fantastical world of American superhero comics, this legendary artist is most famous for his collaborations with writer Marv Wolfman in creating the iconic The New Teen Titans comic series and the Crisis on Infinite Earths maxiseries, the latter of which resulted in Helena Wayne's death and erasure from DC continuity for the next two decades.

Believe it or not, George Pérez has quite a lengthy history with the Helena Wayne version of the Huntress despite her systematic erasure by her publisher during my lifetime. He first got to draw the character during the Crisis on New Genesis/Apokolips Now story arc of Justice League of America (which was an Earth-1/Earth-2 crossover) and even drew her last adventure in Crisis on Infinite Earths. In an ironic twist of fate, he was also the second artist to draw her in the New 52 and got to take an active role in developing her newer history for the latest iteration of the DC Multiverse.

Between the pre-Crisis and New 52 continuities, his rendition of Helena Wayne's Huntress hasn't been entirely consistent and actively changed her appearance for the latter continuity. In his original interpretation of the character, Pérez gave Helena Wayne a more generic appearance that's believable for a woman of British ancestry, but would at times look Spanish in some panels. In the New 52, he actively based the character's look on his friend and cosplayer, Margie Vizcarra Cox, which resulted in a more Latina look for the character. In either case, both appearances work for the character given her somewhat mixed background. The Waynes have almost exclusively been established as British in origin while Selina Kyle's has previously (most notably in the post-Crisis continuity) been established as half Irish and half Cuban. (At least, according to Harley Quinn whom Selina disclosed her childhood to in prison). While Helena Wayne's entire ancestry and ethnicity hasn't been explicitly established in the New 52 due to a lack of background on her Earth-2 family, I honestly won't complain if her background matches up to her current appearance. After all, the Waynes could certainly benefit from having a little more diversity in their gene pool.

On the subject of Pérez's art style, there are three words that first come to mind: DETAILS, DETAILS, DETAILS! That literally never fails to leave me speechless every time I think about George Pérez art. His exceptional attention to detail is so mind-blowing, it really stands out in a way that goes unparalleled with even some of the most detailed artists in the industry like Jerry Ordway and Jim Lee. The fact that Pérez does put a lot of detail into his work as part of giving it a more realistic look means you need to pair him off with the right inker in order to successfully bring out the emotions of his art without making the images look heavy and wooden. That was actually a problem with Scott Koblish's inking of his work on Worlds' Finest, which often resulted in lifeless renditions of the characters in some panels. But with the right inker, his work tends to look really stunning.

The next thing that stands out to me about George Pérez is--you guessed it--his affinity for anatomical correctness. Not only does Pérez always succeed at accurate depiction of human anatomy, but he equally puts a lot of detail into bringing out the muscle tone of both his male and female characters. This was most notable in his rendition of Power Girl whom he gave a build to and his Huntress was equally athletic in appearance--a development that does make sense for both characters. While he may occasionally sexualise the body of Power Girl on some panels, he also doesn't pose her or the Huntress in back-breaking porn star poses designed to induce sexual fantasies from the reader.

On the front of facial expression, Pérez is an expert in this as well. In both the pre-Crisis and New 52 continuities, he succeeded in portraying the right facial expressions appropriate for the emotions the character was supposed to be feeling. I for one will never forget how distressed Helena Wayne looked when she first learnt that her existence was no longer acknowledged. Not only were those very haunting images of a woman being traumatised the by loss of her entire history and existence as a real person, but it's also a huge part of what made her finale in Crisis on Infinite Earths so tragic in my opinion. I cannot imagine waking up one day to find out that my existence is no longer valid and die on that same day without anyone, not even my best friend for a long time, remembering that I once existed. Erasure is, quite frankly, a fate worse than death.

Within the context of the New 52, Pérez's rendition of Helena Wayne is not so much burdened by the loss of her family and existence as a real person as the pre-Crisis version of herself. For someone who lost an entire universe and her own history along with it, Pérez's New 52 Helena Wayne embodies a different kind of fierceness, and in a strange way, embraces her new fate. She still exhibits the confidence of her pre-Crisis self, but she's also incredibly flirty and idiosyncratic when she's not 'working.'

While it is unfortunate that Pérez left the Worlds' Finest title after only nine issues due to creative differences between himself and DC Comics, he nevertheless remains one of my favourite artists in the industry, and I feel very fortunate that I got to see his rendition of one of my favourite characters in two different continuities. I was sceptical at first over some the creative choices he announced in interviews, but after seeing the final product, I can't say I have any complaints about being proven wrong about his creative choices.