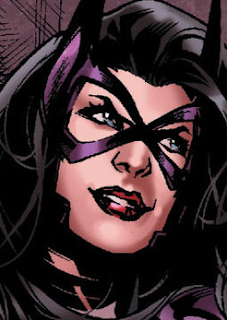 If there is one artist who has drawn the Huntress in the New 52 that I wish would've continued drawing her, it is Italian artist Emanuela Lupacchino. Residing in the capital city of Rome, Lupacchino has been making a name for herself in the comics community for her various works at Marvel, DC Comics, IDW, and more recently, Valiant.

While Lupacchino has regrettably been relegated to cover artist for various DC works, she did get the chance to draw the Huntress for one full issue of Worlds' Finest, (issue #15 to be exact), and 'breathtaking' doesn't even begin to describe the impression it left on me. To fully understand the extent with which her work left me feeling awe-inspired, let's start with the first thing her artwork reminded me of: Terry Dodson.

Anyone who has interacted with me or known me long enough knows how much I love Terry Dodson's work. He was the first American mainstream artist I became familiar with after picking up the first twenty issues of Harley Quinn Vol. 1, and his drawing style was one that had the most influence on me as an aspiring artist. Taking into account how much Dodson's work contributed to my developing my own art style  growing up, it should come as no surprise that I immediately gravitated towards Lupacchino's work when I first encountered it and noticed similarities.

In terms of style, Lupacchino has a very clean and crisp look to her pencil work. Her contours are very fine, solid, and smooth, and she doesn't oversaturate the page with line to give the perception of depth. This is one way that her work reminds me of Dodson. She also has a very good sense of lighting and knows when and where to place shadow, which admittedly is something I've always struggled to get right. In the same way that her contours tend to be very fine, solid, and smooth, her shadows are exactly the same way. There are never any rough edges to her shadows, and if any additional lighting and shadowing needs to be done to fully capture the feel of the piece, she leaves that to the colourist. And of course, under the right colourist, her work really stands out even more.

When dealing with human anatomy, Lupacchino is also something of a perfectionist. I often observe that some artists tend to take 'shortcuts' with anatomy, particularly in very complicated scenes. Lupacchino, however, never takes any shortcuts with anatomy and she makes sure that every single body part--from each individual digit right down to a single lock of hair--looks right. If there are five fingers on each hand and five toes on each foot, she will draw every single one. She will not draw 'bundles' that give the illusion of fingers present, she will outright draw them. On drawing muscle, Lupacchino also demonstrates a thorough understanding of skeletomuscular physiology, and as such, her muscles tend to look very natural on page. She doesn't exaggerate their appearance to give her characters the standard 'body builder' look that is often given to male superheroes in the industry. On posing, Lupacchino admittedly draws her fair share of cheesecake and has been known to even sexualise the female body in ways that draw your eyes to their breasts and butt. Yet, despite this, Lupacchino also avoids posing her characters in back-breaking poses that could not be achieved by even the most flexible person on the planet.

When dealing with faces (and more specifically facial expression) Lupacchino excels at capturing emotion and is quite versatile at it. If her character is feeling confident and fierce, both of those emotions will reflect on the character's face. If that character is also feeling sad and lonely, it will show in a way that differs from depressed and mourning. On drawing facial features, this is yet another way Lupacchino's style reminds me of Dodson's, particularly in the way that she draws eyes, eyebrows, the nose, and even the shape of a character's face. There is a simplicity to the way she draws each of these things while keeping them expressive and life-like. Once again, she doesn't overdo it on the line work and if any additional details need to be filled in to capture the character's full expression, she leaves that to the colourist.

Now that we've spent a considerable number of paragraphs discussing her art style, let's now talk about how well Lupacchino captured the essence of the Huntress. I'd honestly go as far as to say she was one of the very, very few artists in the New 52 who has successfully captured Helena Wayne's, personality, attitude, and body language in full. Admittedly, Lupacchino's Helena Wayne looks very Helena Bertinelli in her appearance (namely in that she's drawn in a way that screams 'fiery Italian' to me), but there's also whole lot of Selina Kyle in there as well, which is very believable for a woman who is her daughter to begin with. Like Selina, Lupacchino's Helena is fierce and carries herself with a fearless demeanour that embodies a very bold confidence. She embodies the kind of confidence that says 'this is someone who's been through a lot in her life and doesn't expect any surprises,' but is also not the type to go down without putting up a fight. She also successfully captures Helena's playfulness in her facial expression and body langauge, which is just as equally important because despite her rather dickish behaviour most of the time, Helena is in fact very playful and loves to mess around. When drawing her action sequences, Lupacchino also successfully captures her momentum and energy, and is often presented as very agile, flexible, and rough which works for a character that was raised to be a fighter all her life.

All in all,  Worlds' Finest #15 was a pretty rewarding experience for Lupacchino's art alone, and it definitely left me desiring more. I actually found myself wondering why she didn't continue drawing the book after that issue, especially since I felt her style was a perfect match for both the Huntress and Power Girl. While it saddens me that Lupacchino is back to being cover artist again and has since moved on to other projects (including the Superman: Lois Lane one-shot that I'm planning on getting in February), I do hope that this won't be the last we see of her! She's awesome!

Tomorrow: Marcus To!
Posted by Diane Darcy at 15:42