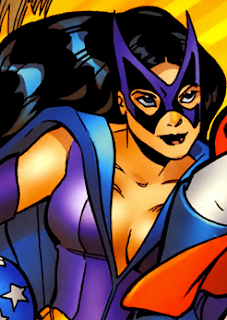 While she is most accurately described as 'The Best Power Girl Artist' DC Comics has seen, Amanda Conner did have a very good handle on her best friend as well, even if she was just a hallucination pulled out of Power Girl's memory by Psycho-Pirate.

In something of a departure from the artists we've discussed so far, Amanda Conner has a considerably more cartoony art style that brings a different kind of energy and momentum into the characters she draws. As such, the motion in her action sequences tends to appear more fluid and a lot less static, which helps to make the imagery feel more lively and engaging to me as a reader. A lot times (to me anyway) I don't feel like I'm reading a comic book but an animated series.

Another thing that stands out to be about Conner's art is her perfect balance between her use of expressive body language while keeping the characters anatomically correct. A lot of times her characters will display very explicit emotions but at the same time she doesn't exaggerate their facial features to get the point across. Similarly, her characters' body language will complement what they're feeling as well, but she also avoids exaggerating their posture and will often keep them posed in ways that are feasible for a human body. Conner also excels at drawing different body types, which is something of a rarity in the industry. She draws a muscular and busty Power Girl and Wonder Woman, she draws an excellent Ma Hunkel who has a larger body type, and she draws a very athletic-looking Huntress. She can also draw lanky-looking lads in their early 20s, as well body-builder looking men, and somewhere in between.

On her use of contour and shadowing, Conner is also very clean and crisp in their use and doesn't saturate the page with excessive line work. This is actually how she achieves the very fluid look of her action sequences. She similarly has a very good handle on lights and shadows, and particularly, she knows when to use them and when not to use them. For the most part, she leaves the lighting and shadowing up to the colourist, which helps to maintain a very clean look for her characters and objects. Even when Conner does the shadowing and lighting herself, she always achieves the perception of depth through the use of colour as opposed to using hatching techniques to achieve the same effect. This is especially useful in an era of photoshop, particularly because it keeps the images from looking too heavy.

While Conner has only drawn the Huntress (both Wayne and Bertinelli) in issues #3 and #4 of JSA: Classified, I felt that she had a very strong handle on both versions of the character. In just the two issues that she got to draw them, she successfully illustrated how these two women were similar and how they differed. Her rendition of Helena Bertinelli is that of someone who is very tough as nails, doesn't waver easily, and maintains a strong front, never appearing weak to anyone. When she was encountered by Power Girl (who at the time vaguely mistook her for her best friend, Helena Wayne) she was very confused about why this person would think of her as 'a friend' despite their non-existent relationship and Conner captured that emotion from the character to a T. As the story progressed, Bertinelli reluctantly agreed to help her, but also maintained her distance from her. She similarly demonstrated something of a negative/indifferent attitude towards her that showed even her body language, which was something Power Girl found unusual from someone she associated with friendship. But when Bertinelli felt vulnerable about the idea of friendship, Conner successfully captured that as well.

When she got to draw Helena Wayne (or rather a hallucination of her from Power Girl's memory) in the following issue, her rendition of her was that of someone who died tragically and was full of sorrow and regret. She was drawn as longing for and reaching out to Power Girl the way an old forgotten friend would, and it was an image of her that haunted Power Girl to the point of tears at the end of the issue. Even those images brought me to tears when I read them, and a lot of that was due to the way Conner illustrated those scenes in addition to the strong script by Geoff Johns. They were just very powerful and moving. As much as Conner is known for her humorous depictions of characters, there's no denying she's very versatile in her depiction of emotion that can range anywhere from cartoony and funny to very serious and heartfelt. That latter one gets me every single time.

It is unfortunate that Conner can no longer due monthlies as a consequence of feeling burnt out, but she remains, nevertheless, my favourite Power Girl artist who also had the privilege to draw the second most important person in her life right after Kal.