10 Days of Christmas, 10 Favourite Huntress Artists of All Time 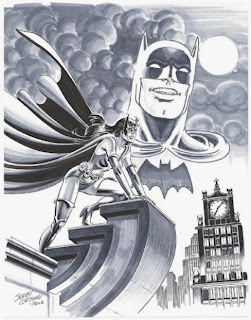 Here it is everyone! The holidays are upon us and they are quickly going as they came. We are officially ten days away from that special day many people celebrate as the birthday of an Israeli man who supposedly inspired millions of people around the globe.

(This is of course taking into account that the actual birthdate is debatable and that not everyone became followers of Christ of their own free will, particularly in countries that were invaded by self-righteous Europeans who imposed their way of life on unsuspecting peoples and unlawfully executed anyone who didn't assimilate....among other reasons).

However, we are not here to talk about religion or any of the politics that come with it. Instead the only 'religion' that matters here is comic book culture and all the nerdgasms that come with it. In particular, my favourite aspect of comic book culture is the exposure to all the talented artists working in the industry and their power to inspire and influence the style of many, many more talents. As a former artist myself who's been drawing since the age of 3, one of the reasons I got into comic books at all was the artwork.

Growing up, I've always admired artists of various time periods and, specifically, their ability to capture a single instance of time in a picture, and bring to life all of the emotion that accompanies it. An instance of time that feels so real you often feel like you're actually there. More often than not, I aspired to be like those artists and throughout my life I've experimented with various art styles until I developed one that I liked. My art style hasn't been consistent over the years and is often subject to change as soon as I notice something that can be improved.

Naturally when I picked up my first comic as a teen (at the time I was more into Japanese manga than western comics), I spent more time analysing every detail of the line work, often admiring all the work that went into illustrating sequences of scenery. I particularly had (continue to have) an affinity for artists with a good sense of human anatomy, good use of perspective, good sense of lighting, and their ability to make every character seem real and life-like.

In the following days when I discuss my favourite artists who have drawn the Huntress from the time she debuted in 1977 to her appearances in the New 52, my evaluation of their art styles will specifically look at those four main things. If every post starts to sound repetitive after a while, that'd be why. :)