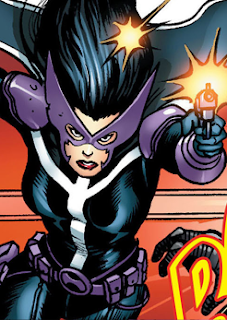 Yildiray Cinar is a comic book artist from Ankara, Turkey who began working for DC Comics in 2009 with titles such as Teen Titans and Legion of Superheroes, the latter of which he was a regular. While Cinar hadn't had many opportunities to draw the Huntress in the New 52, the work that he did do in Worlds' Finest #9 wowed me nonetheless.

One of the things that stood out to me right away about Cinar's drawing style is that he has a very realistic approach to drawing human beings. While this is definitely not unheard of in the industry, I have noticed that compared to the past there's been less of an emphasis on 'realism' in terms of art style and the industry has become more welcoming of various styles that range anywhere from very cartoony-looking to very realistic and life-life, something that fellow artist, Alex Ross, specialises in.

If a scale was to be used to measure where Cinar's art style (1 being very cartoony, 5 being somewhere in between, and 10 being very realistic) I definitely say it falls somewhere between an 8 or a 9. When draws human bodies, it's evident that he strives for anatomic correctness and he poses his characters in a way that is humanly feasible. Similarly, when draws faces, there's a little wiggle room to exaggerate the expression a bit if the character is experiencing an extreme emotion, but for the most part keeps all facial expressions realistic-looking for a human being.

On that note, I also feel he's one of the few artists who succeeds at correctly capturing the emotion a character is supposed to be experiencing in any particular setting, which is not something that is always easily achieved. I can't tell you how many times I've been distracted by incorrect use of a facial expression in a scene that is clearly meant to invoke a different emotion. In a scene, for example, where a character is supposed to be experiencing grief, I get distracted right away if the character has a cynical look on their face, which subsequently makes the rest their lines sound like they're being sarcastic as opposed to serious. Not only do I get sucked out of the story when that happens, but I don't end up feeling what I'm supposed to be feeling during that scene. As such, I can't stress enough how important it is to me that an artist captures the right emotion that a scene demands. Cinar does not disappoint on that front because I always end up feeling what I'm supposed to be feeling. If the Huntress is determined to win a fight, it'll show in both her body language and facial expression. She'll often have a fierce look to her face and her body will often be drawn in a way that invokes the perception of fast movement. Similarly, if the Huntress is shocked to learn something, she will definitely have a look of shock on her face.

Another thing that stands out to me about Cinar, is his use of contours and shadowing. He's not heavy in his use of either one to invoke the perception of lighting and depth and maintains, for the most part, a very clean and crisp look. This is also important to me because as much as I love detail in any given piece, there are times when it does work and times when it doesn't. Excessive use of line for example works best in a drawing that has no colour, but makes an image look very heavy when it does. Cinar is very good at balancing the use of contour and shadow to invoke the perception of depth and light, but leaves enough wiggle room for the colourist to fill in the rest of the details.

While it saddens me that Cinar has not been featured as a regular artist on a Huntress book (there's only one right now), I've nevertheless enjoyed the work he has done on her and hope to see more in the future.