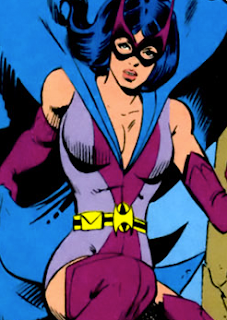 If there is one Huntress artist in the world that you absolutely cannot have this list without, it is Joe Staton. He is, simply put, the quintessential Huntress artist. He was the first to draw Helena Wayne in her first two appearances in 1977, and he was even the first to draw Helena Bertinelli when she made her debut in 1989 following the Crisis on Infinite Earths reboot. In fact, he's so important to the character's history, I could not wait to talk about him that he's showing up on this list a lot sooner than he actually should. So let's talk about Joe!

The first thing that stood out to me about Joe was how perfectly his pencil work captured the personalities of both Helena Wayne and Helena Bertinelli, which are most certainly not depicted the same between the two. During his tenure with Helena Wayne's Huntress in the pre-Crisis days, he often depicted Wayne as very optimistic, happy, and snarky (which made sense for her character), but he could also draw her feeling sad, pensive, angry, and serious when the script demanded it. She was also something of oddball in the pre-Crisis days, which he captured so flawlessly as well. In addition to being very versatile in his ability to capture the essence of Helena Wayne, his work on the Huntress also complemented Paul Levitz' scripts very well. I'd even go as far as to say their synergy as a creative team goes unparalleled, even today.

On the front of Helena Bertinelli, Joe worked equally well with then Huntress writer, Joey Cavalieri. To add to Joe's versatility as an artist, the tone that he captured in the Huntress 1989 series is considerably darker and moodier than his work on the Helena Wayne Huntress stories, which were considerably brighter. As such, you definitely don't get the same feel reading Helena Bertinelli's story that you do reading Helena Wayne. To begin with, Bertinelli's story in the 1989 series is a lot sadder and far less optimistic to the point where you find yourself pitying the woman far more than you find yourself anticipating the next issue. At least that was my experience.

In huge contrast with the version of Helena Bertinelli that is popular with most fans (that being the Greg Rucka rebooted version that was further developed by Gail Simone), the original version of Helena Bertinelli was not nearly as empowered as she would later be known. In her earlier incarnation, she split identity between 'Helena Bertinelli the six-year-old victim of sexual assault and later the sole survivor of her family's brutal murder,' and 'Huntress the avenger.' When she had the Huntress mask on, she could easily forget who she was and could focus on busting the mafia at night, which was something of an outlet for her. Once the mask came off, Bertinelli would once again become haunted by her past memories and regress back into the mind of the six-year-old Helena Bertinelli. The important thing here is that Staton captured every single character beat to a T.

In terms of art style, Staton's art has changed considerably since the 1970s and early 80s. Originally he had a very realistic-looking style (which was the standard in those days) and has since evolved into a more stylised look. When drawing the Huntress he gave both Wayne and Bertinelli very distinct looks: Wayne had a more anglo-saxon appearance whereas Bertinelli had more ethnic look to emphasise her Italian background. Anatomically, Staton also strived for a realistic-looking human body. Helena Wayne was drawn with a sexy body but was also made to look natural and not sexualised. She was also drawn in poses that were (for the most part) physically feasible for a normal human, even if the manoeuvres she performed defied the laws of physics. Also despite being drawn with a sexy body, Helena Wayne was not shown to have stereotypically feminine features. Like her father, she had a squared jaw and her body had a bit of a build to it, which is realistic for someone who 'exercises' regularly and for a lengthy period of time. The same equally applied to Helena Bertinelli, though admittedly she did have more feminine facial features than her predecessor.

Now that we've had the chance to talk about the man who co-created and drew both versions of the Huntress himself, we now get to see how the rest of this list holds out to the Master himself! I will say, they definitely have some very big shoes to fill. Joe is after the ultimate bar to raise the others to in any discussion about Huntress artists.