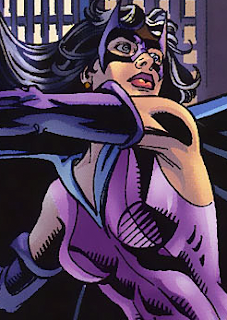 Now that we've spent the last week discussing some of the fabulous talent in the industry, we now get to my #1 favourite Huntress artist of all time. Some have probably wondered why Joe Staton isn't holding the #1 spot on this list, and it is a legitimate question given his own history with the character. After all, he is the man who designed, formalised, and established the look of the character in both of her incarnations. He was even active in developing both versions very early on in their publication histories. But as a comic book fan, as a fan of a particular character, and especially as an artist myself, this list has been more personal to me than most 'top ten' lists that get made. In particular, this exercise has been about the artists who have been the most influential to me.


As someone who no longer gets to draw as much as I used to because of the work that I do, I'm always looking for new ways to improve and often take to other artists for inspiration. Specifically, I tend observe the way other artists handle anatomy (yes, there is a reason I focused on it so much in the previous posts), and I tend to favour ones who have a thorough understanding of how the human body looks and functions. When an artist of this calibre ends up drawing a character I like, I notice them right away and spend a great deal of time observing every detail of their work. I've even spent hundreds in the past buying the original pages from them to get a closer look of the work that they did. All of this factored into the artist I chose as my #1: Jerry Ordway.

In many ways, Ordway has been more than just the man who introduced me to the comic book version of the Huntress, specifically the Helena Wayne Huntress. He was the second American mainstream artist since Terry Dodson to inspire me to start drawing again. For a little bit of background, I have been drawing ever since I was three, and most of my life I've experimented with different drawing styles as a way of improving already existing skills. You can basically say I am self-taught. Prior to becoming a science major, I was originally going to school to become a professional artist. Biggest mistake of my life. Not only did I not like having art teachers tell me that my style was wrong because it wasn't up to their standards, but I especially did not like them telling me how to do something I've already been doing most of my life. Worse yet for me were the deadlines and the long hours I spent doing the work, which often hampered my creativity. After a while I could no longer put forth my best work, and I burnt myself out on the one thing I enjoyed most to the point where I called it quits. I changed my major and pretty much retired my pencil and sketchbook for a long, long time. Then I read the JSA Annual from 2008, and I fell in love with wanting to draw again.

One of the first things I noticed about Ordway's drawing style right away is how very detail-oriented he is. It's not just the way he draws human bodies (which I've primarily focused on in these posts) but there's even a life-like quality to the way he draws the cityscape. His Gotham City, for example, has a very New York feel to it and does not at all possess any of the gothic architecture of the mainstream version, except for a few gargoyle statues. His version of Gotham looks a lot less grimy and feels a lot cleaner, which in a way, makes it feel less dangerous. He's also very detailed in the way that he draws the skyscrapers, which actually reminds me a lot of George Pérez since he also draws very detail cityscapes.

On the front of drawing characters, if there are two words to describe it, it is 'absolute perfection.' I can't tell you how awe-inspired I was to see how realistic his characters looked from the way that their bodies were drawn, right to their body language and facial expressions. He really does excel at drawing life-like people who look real and express real human emotion. That to me is a really big deal because it truly does help to suck me into the story that's being told, and even moreso when there is a very strong script. All of this was evident in the way he drew the JSA Annual and its two main characters of Huntress and Power Girl.

Before we get into the details, it is worth noting that like George Pérez and Joe Staton, Ordway also has a long history with both of these characters. He drew the very first incarnations of Huntress and Power Girl in the pre-Crisis continuity and he drew them again for the post-Crisis continuity when the parallel world of Earth-2 was reinstated. It is also important to note that given the very different tones of these two eras of comics, he didn't draw these two characters the same way in the post-Crisis continuity as he did pre-Crisis. An excellent case in point is the way he drew the Helena Wayne character between these two continuities.

In her original incarnation, Ordway drew Helena as someone who is very compassionate, reasonable, and confident in her work. She was often drawn as serious and mature, and she was also very calm and collected. The post-Crisis version of her, however, was a lot more shaken-up. In huge contrast with the way she was previously drawn, the post-Crisis Helena Wayne was depicted as angrier, more withdrawn, and a lot less trusting of others. In terms of characterisation, she very much resembled the post-Crisis Batman if he was a woman. The only difference here is that Helena was at least willing to kill the Joker if meant saving the lives of the people around her (and many more) whereas the mainstream Batman would never think of crossing that line.

In terms of anatomy, Ordway's handling of Helena's body has been very consistent between the pre and post-Crisis continuities. Obviously his art style has improved since 1984, the overall look of the character has stayed the same. His Helena Wayne has a very anglo-saxon look to her and she has a very natural looking body for a young woman in her late 20s, possibly early 30s by the time she appeared in the JSA Annual. One noticeable difference, however, between the two continuities is that the post-Crisis Helena has more of a build to her whereas the pre-Crisis one had less muscle tone. This was also noticeable with Power Girl as well who was skinnier and less busty in the pre-Crisis continuity than how she was depicted post-Crisis.

In the New 52, Ordway almost had the chance to draw Helena Wayne again when he was assigned to draw eight pages of Worlds' Finest #5. I'll be honest and say it was a huge let-down that Ordway wasn't given all of the flashback pages to draw, especially since José Luis García-López ended up backing out of drawing his sequence (in this case, the Huntress sequence). While I don't think Wes Craig is a bad artist, his art style is also drastically different from that Perez, Ordway, and García-López, which really stood out. But what was most disappointing to me is that we didn't get see how he would have drawn the New 52 version of the Huntress who is wildly different from her previous incarnations.

Since Ordway is the man who (for me) best captured the Helena Wayne version of the Huntress in both of her previous incarnations, I am still very curious to see how much different or similar he would draw this same character in a newer continuity. The closest we got to seeing his version of her was in a sketch that he drew for the Worlds' Finest #5 cover, but a final version of that never saw the light of day. I do hope he eventually gets the chance to draw her in the New 52 with the current costume, otherwise I may have to shell out a good several hundred for a commission. :P

Well fellow readers, this is it! The conclusion of my top ten favourite Huntress artists of all time. I have to admit, most of these were very difficult to write because I never know how to begin a discussion on very talented people. But I nevertheless found this writing exercise very rewarding, and this last entry was particularly special to me.

At this point, it's time to grab a sketchbook and start drawing now that I have some free time before I have to start going back to work next week. :)

That being said, I hope everyone has a very happy holiday season, and I'll have another post up soon just before the year ends, and the new year greets us. Stay tuned! :)
Posted by Diane Darcy at 23:59