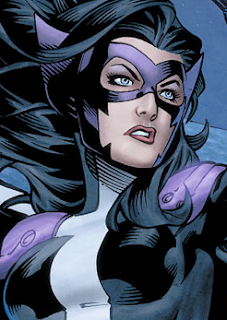 Undoubtedly one of the best talents to surface in recent times, Canada's very own Marcus To is a well known name in DC Comics fandom for his work on Red Robin, and more recently the Huntress miniseries, Batwing, and Cyborg 009.

Admittedly, To was off to a very bad start with the Huntress, not because of any creative decisions he made as an artist being tasked with reintroducing the character in the New 52, but because of the uneven ground that exists between the character's staunchly devoted fanbase and DC Comics' own treatment of the character.

To be very specific, there is a tendency on DC's part to subject the Huntress to drastic origin changes following a major continuity-shifting reboot. Worse yet, they even have a history of deceiving fans of one particular version of the character into buying a book that features a character that looks like the one they want to read about, but isn't. This first happened in 1989 when fans of the original pre-Crisis Helena Wayne character bought the first iteration of a Huntress solo series expecting to see their beloved character again, only to quickly learn that the Huntress fronting that book was a new character named Helena Bertinelli. The same thing happened again in 2011 when DC Comics reintroduced the character via another Huntress series, only this time DC Comics delayed explicitly outing the real identity of the Huntress until they felt the timing was right.

As you can imagine, both incidents have led to massive shake-ups within the fandom to point where there is considerable division between fans of both Helena Wayne and Helena Bertinelli in the year 2013. Given all that was put on the plate there, I can't that I envied Marcus To's position as the guy who had to deal with the constant fandom bullshit despite just doing his job. Nevertheless, To did remarkable work on a character that started off as Helena Bertinelli and was eventually revealed to be Helena Wayne of Earth-2. So remarkable was his work on the Huntress miniseries that it landed him the #2 spot on this list.

Let's start with the first thing I noticed about To right away: he had a ridiculously good handle on the character despite being (initially) in the dark himself over whether the Huntress he was drawing was Helena Wayne or Helena Bertinelli. One of the things I noticed immediately from the first issue was that the Huntress looked a lot like Helena Bertinelli in appearance but possessed the personality traits of the original Helena Wayne character. The fact that he was able to capture the distinct traits of two characters into one person was in itself pretty fascinating. Though at the time, I was more fascinated by the revelation that this was supposed to be the Earth-2 Helena Wayne, a character I recalled being a lot more merciful than this current version, which gets me to my next topic:

His Helena Wayne is layered, but she is also cunning and brutal in her methods. When she is alone and the Huntress mask is off, she is often shown to be very pensive and at times demonstrates thoughts that border on sociopathic. When she is around other people, she presents herself with a charming personality, she's flirty, and is even idiosyncratic in her behaviour. But once the Huntress mask comes back on, her personality transforms to that of a relentless crime-fighter who harbours no sympathy for sex traffickers and is very casual in the way that she hurts and even kills them. Long story short, this is a Helena Wayne who doesn't give a shit for established law and will enforce her own version of it as she sees fit. This is obviously a very huge change from the previous version of her, enough to possibly even horrify the pre-Crisis Helena Wayne if she was see to how her own future turned out. But the bottom line here is that To never misses a single character beat with her, and nails each one flawlessly.

On the front of art style, To also has a very clean and crisp look to his pencil work. Like many of the previous artists discussed, he has a very good sense of lighting and knows when to use shadow and when not to use it. As such, he doesn't overdo it on the line work and maintains a very good balance between light and dark. He adds shadows where needed, but leaves enough room for the colourist to fill in the rest of the details that a scene requires without making the images look too heavy.

On anatomy, To definitely strives for anatomical correctness but doesn't go for the same level of perfection that some of the previously discussed artists strive for. This isn't a bad thing of course, and it does add to the unique look of his art style. His human bodies look natural and don't look too ripped or exaggerated in anyway. On that note, he also doesn't sexualise the female body to appeal to the male gaze and always treats his female characters with respect. His Huntress is always drawn with a natural athletic-looking body for a young woman who is physically active and is never drawn in any cheesecake poses. This is true even in the scene where she beats a pimp unconscious in her lingerie in the first issue of her miniseries. Occasionally he'll give the reader a glimpse at Helena's butt and only once did he actively draw a butt shot of her, but for the most part, To is respectful of her character and doesn't try to sexually arouse the reader with her posing, which is always great to see.

All in all, the Huntress miniseries continues to be my favourite Huntress story of the New 52 so far, and that is in part due to To's fabulous artwork on the book. Even though he's over at Marvel right now, I do hope he gets more opportunities to draw the Huntress (and Power Girl) in the future. I think out of my top five, he's definitely an artist I would like to see again!

Tomorrow....we finally get to discuss my number #1 favourite Huntress artist of all time. He or she may or may not be who you expected to be.