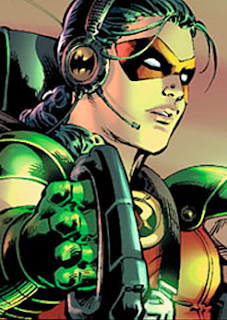 Hailing from Sydney, Australia, Nicola Scott is a fan favourite artist famous for her work on Birds of Prey, Secret Six, and currently Earth-2 for DC Comics.

Like DC legend, George Pérez, there are three things that stand out to me right away about Nicola Scott: DETAILS, DETAILS, DETAILS! To make a case about how detailed Scott is with her art, even when she draws a single character on a blank page, she doesn't leave out a single hair, let alone a single muscle and strives for anatomic perfection. You read that correctly. She doesn't strive for having correct anatomy, she takes it a step further: she literally strives to make the human body look perfect in a way that makes me think of Greek and Roman sculptures from times long past. This is most evident in the way that she draws men who are always bulking with muscle, they all have a six or eight pack, and Scott especially never leaves out the bulge if they are wearing skin-tight leather or spandex.

In addition to drawing some very gorgeous looking lads with perfect hair and nicely padded gluts, Scott also draws her women with athletic bodies. In huge contrast with the industry standard of making comic book women look either like supermodels or porn stars, Scott combats this standard by presenting her women with the same idealised bodies that are often reserved for male superheroes. They may not pack the same amount of muscle mass as their male counterparts, but the women are nevertheless presented with bodies that are feasible for women who engage in physical combat and perform manoeuvres that require a considerable amount of strength. On a similar note, Scott is also famous for reversing the use of cheesecake in order to appeal to the female gaze. In the same way that male artists often draw female superheroes in poses that often place focus on their more sexual parts (that is their breasts, butts, and vulvae), Scott herself applies those same kinds of poses to the men that she draws and often poses her women in the same kinds of majestic poses that are often reserved for men. For excellent cases in point, look no further than her work on Secret Six and Earth-2.

When it comes to drawing the Huntress, Scott has a considerably long history with the character. She has mostly drawn the Helena Bertinelli version of the character in both Birds of Prey and Secret Six, but she also got the draw the Helena Wayne version (as Robin) in the pages of Earth-2 #1. While it is unfortunate that it was decided at both the management and creative levels to inexplicably remove the Huntress from her native world of Earth-2 (or she would still be drawn by Scott), she has nevertheless seen great treatment under Scott's pencil. In the few panels that she got to draw the young Helena, we saw how confident and happy this teenage girl was to be able to work alongside her father before abruptly losing him from her life. In the scene where Bruce began to say his goodbyes to his young daughter upon realising (in advance) that he wasn't going to make it out of the Apokolips War alive, we saw how quickly Helena went from being the enthusiastic assistant to her superhero parent to a very scared child about to lose her father. In just three panels, Scott successfully captured Helena's emotional vulnerability and sorrow to the point where even those panels brought me to tears in a story I didn't even like.

Again the loss of Helena Wayne from Earth-2 is something I've strongly lamented in part because her removal did not help her narrative or character in any meaningful way, and also because Nicola Scott hasn't drawn her since. Drawing from her past experience with Helena Bertinelli (who in my opinion was characterised very similarly to the pre-Crisis Helena Wayne in Birds of Prey), I have no doubt that Scott would have continued to do her justice should she have been allowed to continue to draw her. In the same way that Scott was able to capture the emotional vulnerability of a child losing a parent, she could have similarly captured the fierceness and anger of a young woman who no longer feels like she has anything else left to lose in a world that's been broken beyond repair. She could've also easily captured Wayne's idiosyncratic behaviour and charming personality (when she's not being a dick to anyone that is), given her versatility and attention to detail.

It is of course still possible for Nicola Scott to draw this version of Huntress (and Power Girl) again in the future if returning to Earth-2 is in the cards for this character, and if Scott plans on staying on the Earth-2 title for a lengthy period of time. Since the Worlds' Finest characters are already set to appear in a crossover with Batman/Superman starting next month, the possibility for an Earth-2 crossover is starting to look very likely. Given the tease that we got with the latest solicit for Worlds' Finest #21, I wouldn't be surprised if we start seeing them on future solicitations for Earth-2.