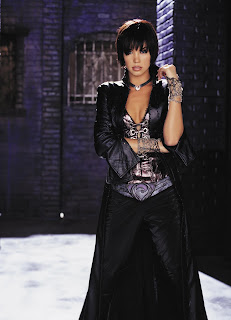 Summary: Helena refuses to attend her high school reunion, not wishing to relive the past. But when Helena's visiting former classmates are murdered one by one, Barbara persuades her to get involved.

Review: When I reviewed the last episode ('Gladiatrix'), I thought there wasn't a whole lot to say about that episode since very little happened there to progress the overall story. The saving grace of that episode, however, was making full use of the cast which led to some amazing scenes with Dinah and Barbara, though mostly the latter.

With the last episode, I managed to write nine paragraphs discussing what the episode did well and what some of its shortcomings were. With this episode, however, I have even less to say because I can literally sum up the entire episode in one paragraph. It's enough to say I'm probably going to be spending most of this review defining what a yandere is to better contextualise this episode's story as that's the only major conflict that happens.

As the title of this episode suggests, Helena Kyle's high school reunion comes up, however, she doesn't want to go to not relive painful memories (namely the death of her mother). Some of her classmates wind up dead, and this prompts the Birds of Prey investigate. The killer turns out to be one of Helena's former classmates: a yandere who's been obsessed with Helena since high school. Helena stops him, of course, with the episode ending on one significant development: Helena choosing to disclose her real identity to Detective Reese.

That's it! That's the whole episode and the one significant reveal! So now, onto the main question for my English-speaking audience: 'what the heck is a yandere?'

I'm honestly kind of surprised Birds of Prey even did an episode on this topic considering there isn't even a name for this type of person in the English language that I'm aware of. In Japan, however, they do have a name for the type of person that functions as the main villain for this episode and that is a yandere [ヤンデレ].

Long story short: a yandere is something more than a deranged stalker.

Applied to the Birds of Prey episode, the character of Cameron Anderson (or 'Cam' as he's mostly referred to) is the living, breathing definition of a yandere with a capital Y. In the episode, Cameron at first comes off as a harmless admirer of Helena until his obsession with Helena becomes explicitly known (1). He is shown to stalk her throughout the episode (2), and murders every former male classmate she interacts with, perceiving each of those men as romantic rivals (3). When he makes his obsession known to Helena, he plots to kill both her and himself as a way of 'forever uniting them' after she explicitly rejects him (4). Luckily for Helena, she isn't easy prey and the only victim of Cameron's murder-suicide plan is Cam himself.

In addition to the yandere conflict, the episode also focuses on another more internal conflict for Helena, which is her choosing to disclose her real identity to Detective Reese—a decision she didn't make lightly. In addition to Helena re-examining her need to separate her civilian identity from her Huntress identity, Helena also re-examines the importance of building trust. She realises that part of building that trust means opening up to the most important people in her life. She determined by the end of this episode that Reese is an important person to her and only decides to disclose her real identity after she reacquainted with a former classmate she was once in love with. A lad named Jack Barrett.

Apart from that, there is little else to say about this episode. Who the yandere was was terribly obvious very early on in the episode (as in before Helena figured it out), and the rest played out in ways that did little to progress the overall story. The only meaningful development was Helena choosing to reveal her identity to Detective Reese, though this reveal should've been accompanied with a more relevant story that added to the overall narrative.

On the whole, this was a waste of an episode, especially since nothing meaningful was said about the dangers of yandere. The yandere in this case functioned as little more than a plot device to give this episode something of a conflict, but the conflict once again didn't tie to the show's central villain, Harley Quinn.