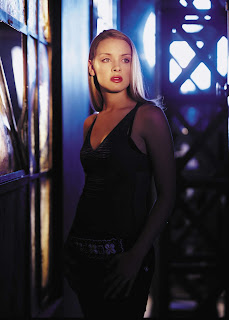 Summary: When a legendary mob boss, Al Hawke, receives a death threat, the only person he trusts to protect him is his son--Reese. Reese asks Helena for help, but when she learns that Reese's father is the same man who killed Dinah's mother, Black Canary, Helena questions her loyalty.


Review: After getting a few episodes that focused on the three heroines of the Birds of Prey, we get our first Reese-centric episode that also serves as a follow-up to episode 05: Sins of the Mother.

Like episode 05 before it, episode 09 also picks up on the theme of family and specifically addresses the topic of family legacy from the points of view of three characters: Reese, Helena, and Dinah, all of whom have complex feelings about their respective family legacies. We especially learn more about Reese’s backstory and specifically his relationship with Al Hawke. This episode confirms that he is in fact the son of the notorious crime boss with very complex feelings towards his father.

On one level, Reese loves his father as a blood relative, but resents his involvement in organised crime. He hates the harm his father's lifestyle caused him growing up, which potentially provides insight into his decision to become a police officer who plays hard by the book. Reese rejects his family legacy, complete with a profound desire to makeup for the sins of his father by doing the polar opposite of what people would expect a mafia son to do. This ironically makes Reese’s narrative very similar to that of the post-Crisis Huntress, Helena Bertinelli.

On the subject of the Huntress, while the show’s version of the character is an adaptation of the pre-Crisis Helena Wayne Huntress, she also struggles to come to terms with her own family legacy. While she accepts the fact her mother was Catwoman and even admired what she did as Catwoman, Helena still rejects her father’s side of her family legacy, which makes her story parallel Reese, but ironically, for the opposite reason. While her father carried out vigilante justice and believed in upholding the law the way Reese does, Helena still resents her father for being absent in her life and for never capturing her mother’s killer or avenging her death.

Vengeance is another major theme in this episode, explored through the eyes of Dinah Lance. While Dinah harbours similar feelings of resentment towards her mother the way Reese and Helena do for their respective fathers, she was also robbed of the opportunity to repair her relationship with her mother when her mother came looking for her due to the actions of Al Hawke. Interestingly, Al Hawke is the character who ties the narratives of all three characters together.

Reese wants to come to terms with his father’s criminal career and wants to believe he’ll change for good, but doesn’t have faith that he will. This allows Helena to disclose her mother’s own criminal past to him, proving that people can in fact change. After all, her mother did change for the better when she became pregnant with Helena. This moment of disclosure also serves as another next step in the Reese and Helena relationship.

Al Hawke is also the character who drives Dinah’s story in this episode. For four episodes straight, Dinah has been bottling up feelings of anger and guilt over the death of her mother and decided to make Hawke her target for channelling that anger. Throughout the episode, Dinah struggles with the desire to kill Hawke as vengeance for her mother’s death. This causes her to behave impulsively until Helena intervenes.

We see Helena function in a ‘big sister’ role for Dinah by dissuading her against killing Hawke by connecting with her on a personal level: by validating her desire for vengeance because she too wanted the same for her mother when she was Dinah’s age. This ultimately dissuades Dinah from giving in to the temptation to kill Hawke. This is a very significant moment for both Dinah and Helena as they have not bonded this strongly in prior episodes, which shows meaningful character progression between the two, particularly for Helena.

Prior to this episode, Helena was reluctant to be a role model to Dinah because she was still in a place of anger, dealing with her own personal demons. As such, she didn't realistically feel like she could be a good adult role model to a young teenage girl in a similar place to herself. The fact that Helena is starting to warm up to Dinah and is starting to understand the importance of being emotionally supportive to a young person who is still developing has led to tremendous growth for her character. Specifically, we're continuing to see her shift away from her being the reluctant, jaded hero we met earlier to a more conventional heroine with a more strongly defined moral compass.