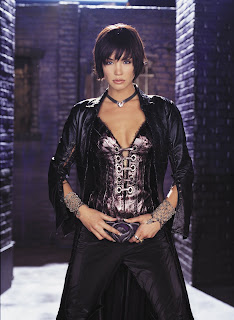 Summary: When Helena rescues an abandoned baby boy, Elliott, and brings him back to the clock tower, Barbara and Dinah try to help. However, to everyone's surprise, the baby is only happy when Helena is holding him.

Review: The episode shifts focus back to Harley Quinn as the main villain, but more importantly continues Helena Kyle’s journey of learning to trust people and build meaningful relationships.

While out on patrol, Helena comes across a bioengineered baby boy and a woman being attacked by some men. Helena manages to save the baby, but not the woman. Barbara, Dinah, and Helena then become the baby’s impromptu guardians and quickly learn he has neural implants that speed up his growth rate, but also serve another function: he’s programmed to be a hired assassin. Realising the baby boy responds better to Helena than the other two women, Helena becomes his reluctant babysitter, though he starts to grow on her. She subsequently names him ‘Guy.’

As Helena learns more about the boy’s origins, she finds herself caring more for his well-being and decides to protect him against the scientists looking to recover him. She remains unaware, however, that her psychiatrist, Dr. Quinzel, is the one who bioengineered him as a prototype for an army of assassins she plans to bioengineer as part of her plan to take control of New Gotham.

As the boy rapidly grows, he becomes aware of the fact he is different and starts to resent his metahuman status. The women reassure him that his being different is nothing to be angry about as it makes him unique, just like the rest of his impromptu family. Once his true function becomes activated by Harley, however, Guy realises his true purpose and begins to fulfil it by tasking himself with killing Helena. Helena gets through to him by not fighting him back and reminding him that he is her friend. Guy helps Helena thwart off Harley’s assassins, but the fact Harley activates his true function causes him to rapidly age and die, which devastates Helena.

We learn more about Harley Quinn’s plans in this episode, which demonstrates both her psychotic, yet calculating nature. Though the playful and gimmicky nature of Harley’s character is largely downplayed in order to make her a more serious threat to the show’s heroines, actress Mia Sara is still able bring out some of these aspects of her character in a way that compounds her psychosis. This version of Harley also demonstrates that she’s less interested in psychiatry than she is at being a crime boss, but uses her psychiatry training to manipulate others.

Throughout the episode, the central theme of family continues to be built upon, which leads to meaningful character growth for each of the heroines and their brief ward, Guy, who realises that being with them made him happy in his very short life. On the subject of Guy, he explores a very different theme that adds on to another recurring theme of the show, which is the definition of humanity. In this case, Guy explores that theme through the lens of human bioengineering and the dehumanising nature of that industry.

While human bioengineering is not a norm in our world even today, in just about every narrative that has explored it as a major theme, human bioengineering creates its own host of problems, such as creating a new class of human that in turn creates a new form of discrimination, particularly against naturally born people. The ability to bioengineer humans can remove predisposition for genetically linked illnesses, as well as manipulate the phenotype of the offspring in order to achieve a highly desirable physical appearance.

The character of Guy does not explore any of those themes, but he does explore another ugly side of human bioengineering, and that is the weaponisation of another human being. The weaponisation of a human being can lead that person's 'creator' to not only exploit their body to fulfil certain functions, but can even programme that person's mind to fulfil those tasks without question. Because the bioengineered person's creator does not see them as human but as a tool for their own fulfilment, they have no obligation to this person and can easily see them as disposable.

In the case of Guy, he was very fortunate Helena got to him first instead of Harley, his creator. With Helena, Guy was able to experience life on his own terms and got to realise for himself what it meant to be a person with agency, even if his lifespan lasted only one day. Had he been in Harley's custody, he would've been robbed of all of those experiences, and would've been nothing more than a weapon she would've eventually disposed of once she no longer had use for him.

Because Helena, Barbara, and Dinah showed him kindness from the very beginning and treated him like a human being despite his origins, Guy was able to overpower his own programming by way of establishing his own identity. This is another thing he would not have been able to experience had Harley gotten her way.