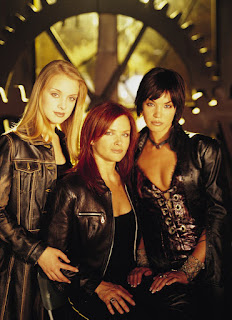 Summary: Having discovered that Helena is Huntress, Harley uses a machine that gives her meta-human hypnotic powers. She then hypnotises Helena and persuades her to knock Barbara unconscious and steal an access disk.

Review: Here we are! The last episode of the series, which means it's also time for the moment of truth: was it a good show?


When this episode opens up, it does so in almost a similar fashion to the pilot episode. We see Helena Kyle in her last therapy session a changed woman. She is noticeably happier and a lot more trusting than when we first met her in that first episode. Sometime during her offscreen therapy sessions with Dr. Quinzel, Helena disclosed her secret identity as the Huntress to her therapist, along with the secrets of Barbara and Dinah.

Unfortunately for Helena, she was the sheep that walked right into the lion's den because Dr. Quinzel is the main villain they've been thwarting on various occasions throughout this series. Now that Dr. Quinzel (aka Harley Quinn) knows Helena's secrets along with those of her friends, Harley executes her plan to take over New Gotham, starting with Oracle's main headquarters: the Clocktower. Feeling guilty over her role in facilitating Harley's destructive plan, Helena assists Dinah and Barbara in stopping her.

In terms of execution, the episode is well written and the actors bring their best performances to the table. Mia Sara is convincing as the maniacal, yet calculating Harley Quinn, Dina Meyer continues to shine as the strategic and scientific Oracle, and Ashley Scott continues to show different layers of the emotionally complex Huntress. But the character who is once again sidelined is Dinah, which makes me feel sad for Rachel Skarsten because she once again makes the most out of the little screen time she is given.

Despite a well written episode, unfortunately the series finale also shows everything that went wrong with this first series. A lot of significant developments like Helena unknowingly disclosing both hers and her friends' secrets to show's main villain happened off screen, which kind of leads to the other problem the show had: Harley Quinn was barely in it as a major, let alone prominent threat.

At best, the first six episodes appeared to be building Harley into becoming New Gotham's most dangerous crime boss. But from episodes 07-10, her character arc is given no attention and is significantly absent until the last two episodes. By the time Harley reappears to finally execute her plan to become New Gotham's most promising crime boss, I'm left wondering what exactly she was planning on doing.

Surely, taking over Oracle's Clocktower wasn't the only thing she had in mind, nor are we given any explanation for why Harley wants to turn everyone in New Gotham insane. Where's the profit in that? For Harley's threat to be truly felt in this series finale, she needed to be more prominent throughout the series, complete with a meaningful character arc to better explain her motivations.

The other reason she needed to be more prominent as the series villain is because she's the villain who more directly affects the actions of the three lead heroines who are supposed to be a team. Without Harley having a more meaningful role in this first series, the three members of Birds of Prey had little opportunities to actually work together as a team. As such, they had little meaningful screen time together with much of the show choosing instead to focus on Helena Kyle's heroic journey as the Huntress, complete with her budding romance with Detective Reese. Again, this would not have been a problem if the show was actually called The Huntress, but the show is called Birds of Prey.

Looking back on the series as a whole, the series itself had a very promising start as a series about three women with broken backgrounds operating in a post-Batman Gotham. The series was ripe with strong story potential, especially as a team that's more like a family than anything else. But halfway through the series, the story started becoming less focused, and it especially started to lose sight of the kind of show it was aspiring to be. What was meant to be a show about three women ended up being a show about one woman, in this case the Huntress. More than Birds of Prey was an adaptation of the popular comic book series of the same name, it was really a Huntress television show.

Apart from making Harley Quinn a more prominent villain with a story that more meaningfully built towards the finale that we got, if there is one more thing I would have changed about the show to improve the story, I would've dropped the romance subplots for both Huntress and Oracle completely, at least for the first 13 episodes.

Not only did the romance subplot do little to progress Oracle's story, but I especially felt that Huntress' romance with Detective Reese completely robbed her co-stars of more meaningful screen time. I especially felt that Helena's team members should've been the characters who contributed to her character growth throughout this series. Again, the show is called Birds of Prey and the expectation is a show about three women who are friends who also happen to be a crime-fighting team. All three women should've been the primary focus for the first 13 episodes, not just the Huntress as much as I love her.

The first 13 episodes needed to spend time developing all three heroines in order to more strongly establish who they are as characters, and especially set the tone and premise for the actual show. The romances between Wade and Barbara, Helena and Reese could've been saved for the second half of series 01 if a full season eventually got ordered by the WB, or it could've even been done in a series 02. But I guess that's the Catch 22 of television and film.

In many cases, storytellers only have one shot to tell the story they want to tell because there is no guarantee they'll get more opportunities to explore all the ideas that they have. In many cases, they have to make do with what they have, which often causes storytellers to understandably try and cram as many stories as they can in the little space they have to work with. That's very much what I felt happened with this series and it showed in the second half in particular.

Of course, I could go on discussing how many more things I would've changed to help ensure the success of the first series with audience members and increase its chances of being renewed for future series. But truth be told, issues with the story itself wasn't the only thing that hurt this show at the time that it aired. Things like inconsistent scheduling and embargoes on certain DC properties most likely played a hand in that as well.

I do think, however, that when you're only given one shot to tell a story, having a carefully planned story becomes that much more important. Not just to sell an audience on the show and characters, but also to have a strong foundation to build off of if given more opportunities to tell more stories with those characters. Even if you don't get more opportunities for whatever reason, you should at least still end up with a story you are happy with, with a strong enough impact to keep people revisiting the show and talking about it for years and decades to come.

As for whether or not it was a good show? I maintain my original opinion that the show is enjoyable for what it is. Flawed in terms of having a focused storyline and giving each of the three leads and villain equal attention, but the characters themselves are likeable and hold the show. It also helps that the roles are well cast. I still think the show has potential, and in the current superhero hype of this decade, the show would most likely thrive with today's DCTV audience. It's just a matter of the CW deciding whether or not to give this show another shot or have the characters appear in other CW shows.