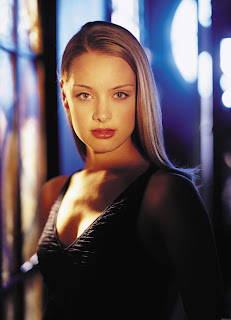 Summary: Along with Barbara and Helena, Dinah learns the truth about her past when her mother, Carolyn Lance, comes to New Gotham in search of the daughter she abandoned years before. Dinah is shocked to learn that Carolyn was once Batman's protege, Black Canary. Meanwhile, Helena finds out that Reese has family problems of his own when he becomes secretive about a ruthless gangster.


Review: After getting mostly Helena Kyle-centric stories for the past four episodes, episode 05 gives us our first Dinah-centric story that fully explores the character's origin. In addition to learning more about Dinah, the episode also continues to explore the theme of family with a new layer: legacy.

The theme of legacy has been present since the beginning of the series with both Huntress and Oracle building on the legacy of Batman. While the Huntress has mostly taken her father's place as New Gotham's protector, she also fights primarily in the memory of her mother. For this particular episode, the story explores a different legacy all together with another superhero mum at the epicentre of the narrative: Black Canary. With the emergence of Dinah's mother, the story also dives into the reason she was put in foster care.

Based on the character of Dinah Drake (who is the original Black Canary in the comics, and is the mother of the second Black Canary, Dinah Laurel Lance), Carolyn Lance seeks to reconcile with her daughter in order to dissuade her from pursuing a superhero lifestyle. While I would normally take issue with seeing any version of Dinah Drake depicted as a mother abandoning her own daughter since both Black Canaries are amongst my favourite characters in the comics, Carolyn’s story actually makes sense within the show’s narrative.

In the show, Carolyn worked as a double agent who infiltrated a dangerous criminal organisation in Gotham as the Black Canary, which led to their successful dismantling. While Carolyn was successful in her task, it came at a great price: the endangering of her 6-year-old daughter’s life. After an assassin attempted to take her daughter’s life, Carolyn put her with a foster family in order to protect her against the gang’s retaliation.

I like that the episode immediately dives into the question of whether or not a superhero could realistically marry, have children, and still be able to lead that lifestyle. It's a narrative that addresses one of the deadly consequences of the superhero lifestyle and the impact that it can have on the most important people in that hero's life, including their own children.

I like that the story does not attempt to downplay or simplify the complex nature of this parent-child relationship, and the toll that it especially has on the child. While Carolyn still made the heroic sacrifice of placing her daughter in the care of people who are in no way connected to her superhero lifestyle, the impact that that separation still had on her daughter wasn't lessened by that revelation.

The fact that Dinah was still too young to know (let alone comprehend) the dangerous lifestyle her mother was leading—before and after her birth—from her perspective, she was abandoned by her mother. This understandably led her to grow up feeling hurt and resentful of her mother during those formative years that by the time she reunited with her as a teenager, it did nothing but reopen unhealed wounds of the past.

Rather than feel enthusiastic to see her mother again for the first time in a decade, Dinah was met with the trauma she experienced as a child coupled with the questions she understandably had regarding her mother's actions. Even when she did get the answers she wanted from her mother, it was still not enough to repair the damage. What made matters worse for Dinah was being robbed of the opportunity to heal emotionally and forgive her mother for the trauma she caused her growing up.

The part that stung the most for Dinah was being robbed of the opportunity to rebuild her relationship with her mother because returning to New Gotham also resulted in her mother's past catching up with her, leading to her death. I liked the fact that Dinah and Carolyn were depicted as having complex emotions during their reunion, which afforded both of the characters depth. The strong direction of this episode also brought out the best performances from both Rachel Skarsten and Lori Laughlin.

On the side of the Redmonds (Dinah's adoptive family), I admittedly felt that their depiction in this episode contradicted their earlier depiction in episode 01 as there was no hint of an abusive relationship between Dinah and her foster parents. This contradiction therefore felt like a retcon. Ironically, the retcon also better contextualises the reason Dinah ran away in order to join Barbara and Helena. Nevertheless, I do wish this aspect of Dinah's story was better thought out and executed.

In addition to Dinah’s narrative and subsequent character development, this episode also continues to see Helena’s own personal journey unfold in her subplot with Detective Reese. At the start of this series, Detective Reese was profoundly distrustful of Helena, which was part of the reason she started working on her own trust issues. In addition to needing Reese’s trust in order to get information on cases she works on, she also begins to understand that trust is a two-way street in the buildup of a meaningful relationship, which is what she really wants with Reese.

Comic Book Easter Eggs: The Black Canary is still depicted as the heroic legend she is in the comics, complete with the iconic Canary Cry. The difference, however, is that the Canary Cry is more strongly associated with Dinah Laurel Lance than her mother, who historically never had it. While technically not a comic book easter egg, another interesting piece of trivia for comic book nerds out there is the actor who plays Al Hawke in this episode—Stephen McHattie—also portrays Hollis Mason (the first Nite Owl) in Zack Snyder’s film adaptation of Watchmen from 2009.