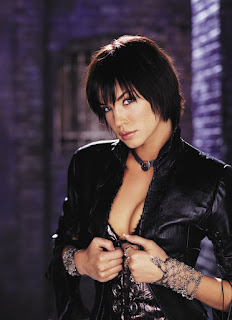 Summary: At Reese's request, Helena goes undercover to help thwart a gang of thieves terrorising New Gotham and quickly discovers that the group is part of a larger criminal infrastructure. Helena pursues the top boss until she is exposed, putting her in grave danger.

Review: After being treated to a much needed episode that focused on Dinah Lance last episode, we're back to another Helena Kyle-centric episode that focuses on the growing relationship between herself and Detective Reese that continues to explore the theme of trust. We see significant growth between both characters.

From Helena’s end, she continues to demonstrate a strong desire to bond with other people and build meaningful relationships. She wants Reese to be a part of her life and wants to show that he can trust her. She accepts an undercover assignment from him as part of building that trust.

In addition to her feelings for Reese, we also learn more about Helena’s feelings about her mother that differ significantly from her mainstream comic book counterpart, Helena Wayne. Whereas Helena Wayne has more conflicted feelings about her mother’s criminal past to the point of fearing she could one day be tempted into a life of crime, Helena Kyle by contrast is not bothered by her mother's criminal past. Instead, she demonstrates a desire to understand her mother’s motives as Catwoman.

By joining the animal gang, Helena puts herself in her mother’s shoes and even uses one of her former aliases—‘the Cat’—along with one of her mother’s former cat masks (both clear nods to Selina Kyle’s earlier appearances in 1940.) By being a ‘member’ of the gang, Helena quickly learns how exhilarating and thrilling her mother’s Catwoman lifestyle was and even feels herself tempted to go rogue—a detail she confides to Oracle.

Despite Helena’s desire to earn Reese’s trust, she also quickly learns she is a woman of experience and habit and can’t do what Reese wants her to do 100%. Whereas Reese is obsessed with capturing the animal gang and calling it a night, Helena wants to go after the bigger fish: the actual crime boss sponsoring the gang. This is—perhaps ironically in Helena's case—one trait Helena shares with her father, Bruce Wayne.

Like Bruce, Helena focuses on the bigger picture and understands the importance of not having tunnel vision when fighting crime. As such, Helena prioritises smart strategising to get to the heart of a criminal network over capturing the small fries who carry out the work of more powerful crime bosses. This is not a vision Reese shares as a man haunted by his own family legacy that's neck-deep in organised crime.

With Reese and Helena having different priorities as crime fighters, this results in Helena changing her strategy, which causes her to withhold information from Reese. This proves to be a fatal mistake as Reese’s partner ends up severely injured when the animal gang—which Helena thought was harmless—attempts to blow up their van. This causes Helena to temporarily loose Reese’s trust, but later regains it when Reese’s own strategy fails him and Helena ends up rescuing him.

Though Reese continues to hound Helena about keeping secrets from him, it was also revealed in the last episode that he has secrets of his own that he won’t tell Helena about that ties him to organised crime, specifically to Al Hawke—the killer of Dinah’s mother. How long before Helena discovers Reese's secret, only time will tell. But I imagine she would have a thing or two to say about his obsession with learning her secrets once she learns more about his past.

In addition to Helena’s central storyline, we also see progression of Barbara’s relationship with her boyfriend, Wade, who make love for the first time in this episode despite a disastrous meeting with his parents. This presents Wade as a loving boyfriend who loves Barbara for the person she is and not for her disability. While it's great to see Barbara have a life outside of the Birds of Prey, I also don't feel like her character arc gets as much focus as the other two heroines, which is something I hope changes as the series progresses.

Comic Book Easter Eggs: 'The Cat' was Selina Kyle's first alias when she first appeared in Batman #1 in 1940, and Helena Kyle's mask in this episode resembles the one Selina wore two issues later in Batman #3. The Catwoman cowl from the 1992 film Batman Returns is also present in this episode.