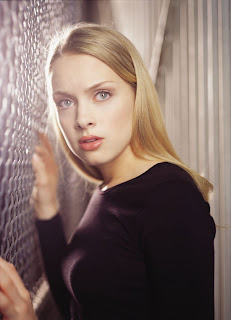 Summary: Concerned over the disappearance of several female meta-humans, Helena investigates Malcolm Lagg, who manages a fight club that pits meta-human women against one another as men watch. After luring Helena to a prison in Old Gotham, Malcolm captures her and injects her with a substance to make her more aggressive.

Review: This is probably going to be my shortest review on this series largely because there’s not a lot that happens in this episode that progresses the overall story. This is probably not helped by the fact that one of the show's heroines—Huntress—doesn't have much agency for much of this episode. It does, however, have some significant developments for Dinah in particular, and it's one of the few episodes in the series that actually focuses on all three heroines as a team.

The episode opens up with both Dinah and Helena stopping an abduction, but Dinah is quickly robbed of the opportunity to gain real crime-fighting experience when Helena decides to take control of the situation. We quickly learn that Dinah is at a point where she wants to be taken seriously as a crime-fighter and wants the opportunity to prove herself without the adults stepping in.

Helena still sees Dinah as a child in need of protecting and undermines her ability, which is a source of conflict between the two heroines. Fortunately for Dinah, though, she does get the opportunity to prove herself when Helena is captured by the very abductor they were tailing earlier. I have to admit, with Helena removed from the lead crime-fighter position, the episode was finally able to focus on the other two heroines Dinah and Barbara, which is something I've been wanting to see for quite some time now.

I quite enjoyed seeing Dinah's determination to prove her worth to the team, but unfortunately, Dinah only gets one opportunity to shine in this episode, and that is in rescuing Helena. Her investigative skills unfortunately happen offscreen, which is a bit frustrating as that would've been a perfect opportunity to see how much she has learned from the time she arrived at Oracle's clocktower in episode 01 to now. The bulk of the superheroics in this episode are primarily done by Barbara, which admittedly I can't complain about.

One of the things I really enjoyed about Barbara in this episode is that we got to see more of her core traits as Oracle that we often see in the comics. Earlier in the series, we learnt that Barbara is an information broker, but she hasn't had many opportunities to show those skills and that's something that we got to see more of in this episode. For example, we got to see how she tracks where people are (in this case, Detective Reese) on GPS via mobile phones, and we even got to see her own advanced communication devices that can account for areas with low cellular signals. (I dare say, Barbara invented the AirPod almost two decades before Apple did.)

Another thing that I loved about Barbara in this episode is that we got to see more of her own investigative skills, and how those skills came in handy for tracking down Helena's location in the sewers of Gotham. Everything finding out the symbol on a key card the villain left behind and who was linked to that symbol, to being able to determine what kinds of women were being abducted by comparing all available data to her metahuman database. I especially loved how she was able to locate where Helena was being kept in the sewers of Gotham based on the presence of a certain mineral she collected from other evidence surrounding Helena's case. The way Oracle was depicted here is something I wish had been more prominent throughout this series.

As for the main villain of this story, he's once again not connected to show's main villain—Harley Quinn—but he does check all of the boxes for the quintessential creep. The main villain of this story is a slightly disfigured white man named Malcolm Lagg who is otherwise good-looking. He runs an underground fighting ring where wealthy men pay to watch death matches between metahuman women. He is also the abductor Helena Kyle was tailing earlier only to be captured by him. While in his custody, Helena is subjected to Lagg's dehumanising remarks and is then forced to fight other metahuman women he has captured.

The villain of this story embodies many of the traits associated with male entitlement and the varying degrees of misogyny that accompany that entitlement. Amongst the behaviours displayed include intense hatred of women from all walks of life, abduction, enslavement, drugging women, and trafficking them. When you think about it, the fighting ring is really a stand-in for sex slavery and other criminal activities you'd find on the dark web. This is especially true when you consider wealthy white men are depicted as clients paying big money to see women brutalise each other to death.

By the time the episode ends, the villain is captured of course, but it ends with Helena respecting Dinah as a crime-fighter a bit more, which is significant character development for them both. Beyond that, the episode is very much filler, but it does an amazing job at focusing on the other heroines—Barbara and Dinah—working as a team.