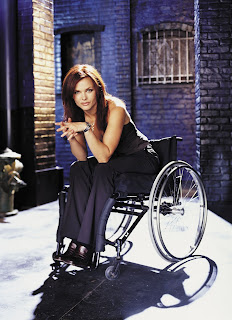 Summary: Helena is thrilled when her best friend from high school, Sandra, returns to New Gotham, but the crime fighters are troubled by a series of murders with the unmistakable mark of Barbara's nemesis, Lady Shiva. Determined to fight Lady Shiva as an equal, Barbara dusts off her Batgirl costume and experiments with technology that allows her to leave her wheelchair.


Review: After addressing concerns in my last review about the lack of focus on the other two heroines of Birds of Prey, we finally get our first Barbara Gordon-centric episode where she comes to terms with a mistake she made in her past as Batgirl.

As much as I love Helena Wayne as a character and am happy that a version of her exists as a protagonist in this show, I also feel that in a show called Birds of Prey, she shouldn't be the protagonist getting the lion's share of the show's focus. I also feel that her co-stars Barbara and Dinah should be getting the same level of focus since they are her teammates, and their development as characters should be just as important. Despite the fact Sandra Woosan is introduced in this episode as Helena Kyle's best friend from high school, it is actually Barbara Gordon who is the protagonist of this episode, which in my opinion, is a nice change of pace.

Prior to this episode, all that we've learned of Barbara Gordon is that she started her crime-fighting career as Batgirl before the Joker paralysed her and reinvented herself as Oracle. As Oracle, Barbara became an information broker who trains new superheroes like the Huntress and future Black Canary, Dinah Lance. She even invents new technology to assist with her crime-fighting endeavours. Outside of her superhero lifestyle, Barbara is a school teacher who recently started a relationship with a co-worker named Wade.

In this episode, we learn more about the kind of technology Barbara has been developing. In addition to inventing new crime-fighting tools, Barbara has also been inventing technology to help her walk again, and uses a prototype in this episode to confront Lady Shiva. This is the first time we see Barbara at her most vulnerable. Not due to her disability, but due to a need to forgive herself for a past mistake she made as Batgirl that cost a young teenage girl her life.

In the flashback sequence, we see that Barbara as Batgirl was passionate about justice, but also arrogant and a little bit reckless. At the time, fighting crime was about winning, and in pursuit of victory at almost any cost. We see Barbara has continued to reflect on this and the scene where she unveils her Batgirl suit while in her wheelchair is one of the most heart-wrenching scenes to watch. More than Barbara was missing her life as Batgirl, she was confronting her guilt.

There are great scenes with Helena as well because we see how much she’s grown from the past episodes, but most importantly, we see how important Barbara is in her life. Despite not always agreeing with Barbara on various things about her own life, Helena does love Barbara a lot and cares for her well-being to the point that she’s willing to risk upsetting Barbara to protect her from danger.

Despite Helena's best intentions, however, Barbara does show that she does not like having people (especially abled-bodied ones) intervening in her fights. This is in part due to the fact that intervention by able-bodied heroes reinforces ableism. The other part of it is also due to ego because out of her entire team, Barbara is in fact the more experienced fighter. Seeing how Barbara responds to help as a disabled, older superhero allows the viewer to experience the complex emotions she most likely experiences on a day-to-day basis.

While Barbara accepts the fact that she is disabled, she is also navigating through a world that treats her differently regardless of her talents as a person. She is also aware of how her disability can be exploited and used against her, especially in a confrontation with a deadly assassin like Lady Shiva. She is especially vulnerable when she doesn't have the assistance of her teammates, or when the technology she relies on fails her in the moments she needs it the most. Despite this, however, the episode also shows that Barbara is very adaptable and that she never arrives to a fight unprepared. Even if she can't get up and use her legs in a fight, she can still deliver incapacitating blows from her wheelchair, using a pair of escrima sticks.

On the subject of Lady Shiva, I have to admit, I’m rather underwhelmed by the way she was used in this episode. On the one hand, I loved Sung Hi Lee in the role, but I also felt the character of Shiva should’ve been depicted as being Barbara’s age or older to truly present her as the experienced, deadly assassin she is famous for being in the comics. On that note, the show's version of Lady Shiva isn't even established as being the world's most skilled and deadliest fighter the way her comic book counterpart is. Instead, she is depicted as a petty thief who happens to be a highly skilled, but also easily beatable martial artist, which is highly underwhelming.

While I do accept the fact that TV adaptations of comic book properties are made with the general public in mind and are not obligated to follow the comic book canon, I still feel that Lady Shiva being the world's highly skilled martial artist and deadliest assassin is her most sellable trait as a character. As a villain, the fact that she can best other skilled martial artists like Bruce Wayne, Richard Dragon, and even R'as Al Ghul in a fight means that she presents a unique challenge to the world's heroes. How do you beat the world's deadliest assassin without it costing your life? Can you beat the world's deadliest assassin and still walk away with your life or body intact?

The fact that the show's main protagonist, Helena Kyle, has thus far not met a villain she could not easily handle, having her take on the world's deadliest assassin would've been an incredibly exciting change of pace. It would've especially provided a strong opportunity to see her work alongside the show's two other protagonists as a team. There's no doubt this would've been true if Shiva was actually contracted by the show's main antagonist, Harley Quinn, to take out the heroes who have been continuously thwarting her plans since episode 01. It would've made for a more appropriate use of Shiva's character given her reputation that would've also more strongly serviced the show's overarching story.

The amount of story potential Lady Shiva could've brought to this episode was so criminally wasted, it literally pains me to write this review considering how much this episode had going for it already. Making Shiva a past enemy of Batgirl was a solid starting point for introducing the character to the larger story, especially with someone like Harley Quinn as the main villain. But making Shiva the same age as Helena Kyle underserves the character, and making her Helena's childhood friend is a creative choice that makes even less sense for a villain of Shiva's reputation.

If Helena absolutely needed a stake in the Lady Shiva conflict in order to stay relevant to the episode's narrative, Shiva's own daughter, Cassandra Cain, could've easily fulfilled the role of Helena's childhood friend. Not only does Cassandra Cain already possess most of the same skills as her mother and can best Helena in a fight, but Cassandra being 'different' like herself would've also attracted Helena to her as a child since Cassandra's disability is severe dyslexia and mutism.

Finding out that Cassandra's mother is the world's deadliest assassin and also a dangerous enemy to her mentor, Barbara, would've created a stronger conflict for Helena. In addition to Helena needing to choose between protecting her childhood friend and her mentor from her mother, Helena would've especially understood Cassandra's plight as the daughter of a criminal herself, in this case, Catwoman.

While Catwoman's criminal behaviour nowhere near matches Lady Shiva's in terms of severity, it would've nonetheless provided another common ground for both Cassandra and Helena to bond over. It could've even resulted in a character like Cassandra Cain becoming a mainstay on a show that already explores a group of 'outsiders' becoming a family of sorts, and would've even allowed her to function in a role that's similar to that of her comic book counterpart. Again, another wasted opportunity.

On the whole, I felt that this episode started off on a very strong foot since it spent time developing Barbara as a character, and especially Helena's relationship to her. Something that was much needed in this series. The episode did a great job at exploring Barbara's internal conflicts, and the way she confronted the demons of her past. Where the episode missed its target was in completely wasting Lady Shiva as a villain. It accomplished this by placing her in a role that would've been more appropriate for Cassandra Cain at best, and especially failed to capitalise on Shiva's greatest strength as a character to move the larger story forward.

Comic Book Easter Eggs: Neal Adams is mentioned in this episode and he is comic book artist best known for his definitive work on Batman, Green Arrow, and Green Lantern during the Bronze Age (1970-1986).