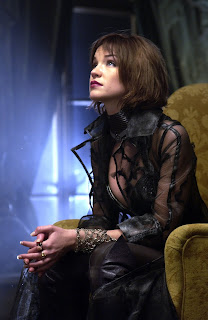 Summary: Frustrated by her relationship with Reese, Helena becomes intrigued when she meets Darkstrike, a meta-human who has come to New Gotham on the trail of a serial killer. Meanwhile, Barbara and Dinah discover that Darkstrike has a dangerous alter ego.

Review: We are now at the midway point of the Birds of Prey television series, and episode 07 opens with another Helena-centric story where she continues to work on her trust issues. This development continues to be explored with Detective Reese, but goes in a new direction when she meets an old friend of Barbara Gordon’s: a young male superhero named Darkstrike.

We learn more about Helena's character in this episode. For most of the series, Helena has been depicted as a reluctant hero who does what she does in part for an adrenaline rush, and in part because that is the lifestyle her guardian, Barbara Gordon, leads. In this episode we learn that she actually does take pride in her work as the Huntress despite what she tells other people, and that she does take issue with other superheroes stealing her thunder.

Another thing we learn about Helena in this episode is that she can experience jealousy in the presence of other women she perceives as romantic rivals for Reese's affections. Frustrated with Reese’s inability to trust her, she immediately gets jealous when she catches a female district attorney flirting with Reese. Admittedly, I can't help but notice a bit of coincidence here.

In the mainstream comics, Helena Wayne’s romantic partner was a district attorney named Harry Sims who also had trouble trusting her because he wasn't comfortable with her vigilante lifestyle as the Huntress. Harry's position on the Huntress' activities were also not much different from those of Detective Reese in the show, and Helena Wayne's frustration with Harry mirrors those of Helena Kyle with Reese.

Whether or not the presence of the female district attorney in the presence of Helena Kyle's distrustful love interest is meant to be nod to Harry by the showrunners is unknown, but the thought certainly crossed my mind. On Reese's side of the equation, he also got jealous of Darkstrike when he caught Huntress working with him and wondered if he was a romantic partner. I guess this is meant to serve as a confirmation that Reese does have romantic feelings for the Huntress after all, but has a funny way of showing it.

Interestingly, there is a discussion amongst Barbara, Dinah, and Helena about who would be a better romantic choice for Helena that mirrors a similar discussion between Dick Grayson (Robin) and Helena Wayne in the comics. The central question asked in both cases is whether or not Helena should pursue a romantic relationship with someone who would be easier for her to date (like another superhero), or if she should follow her heart and be with someone she genuinely loves, even if that relationship comes with significant hardships like dating a police detective or a district attorney. In the end, Helena chose the latter.

I would say my favourite thing that happens in this episode is Helena realising for herself the benefit of working with other superheroes and not just the ones she’s used to working with. We also see Helena embrace a more heroic role in this episode similar to the one we saw in 'Three Birds and a Baby.' She shows genuine concern for the victim she rescues from the Crawler, and even shows sympathy for the Crawler when he is revealed to be Darkstrike's alter ego. She recognised that he needed help and sought to help him instead of hurting him. This is significant character growth for Helena compared to the earlier episodes.

This is where—in my opinion—the show really starts to lose its vision. In the first episode, we were introduced to Barbara, Dinah, and Helena as the protagonists of the Birds of Prey series with family as a central theme. Seven episodes in, Helena has gotten—excuse the pun—the lion's share of the show's focus with her co-stars barely getting that same level of attention and character development. Additionally, so much of Helena Kyle's character growth in the series isn't even focused on her relationship with her actual co-stars, but on her wanting to develop a romantic relationship with Detective Reese.

While I personally do not object to Helena having a love interest (which was the primary focus of this particular episode), I also feel that her love interest should not be substituting the role that her co-stars should actually be fulfilling on the show. This is also not helped by the fact that despite the presence of a popular DC villain like Harley Quinn, the show is similarly failing to build Harley into a genuine threat that keeps these three women focused. Without a strong villain for the three women to focus there efforts on, there are little opportunities for them to work together as a team, and there's especially less opportunity to continue exploring the theme of family that was present in the first episode.

Many of these story developments wouldn't be a problem if the show was called The Huntress. But because the show is called Birds of Prey, and even established in the first episode that three women are the show's protagonists, not just the Huntress, the show should be more strongly developing the other two women and especially Helena's relationship with them. At the bare minimum, Dinah got one episode where she was the focus and Barbara has something of a character arc going for her, but it isn't getting the level of attention that Helena's character arc is getting.

These are issues that the remaining six episodes of the series need to address in order for it to end strong and not feel like it ended on a completely different note from the one it actually started on.

Comic Book Easter Eggs: Central City is mentioned in this episode, which is the city Barry Allen resides in and operates as the Flash.