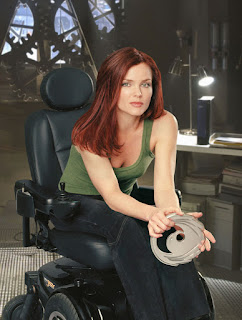 Summary: After a robber, Chris Cassius, breaks into a chemical factory and drinks a mixture that gives him the power to turn people to stone, Barbara cancels her vacation with her boyfriend, Wade.

Review: After an underwhelming episode 11, I admittedly enjoyed this episode, namely because it got back on track with what a Birds of Prey show is supposed to be about. The way this episode played out is how I feel the entire series should've been, and unfortunately, it gets back on track a little too late.

We finally see Harley Quinn again for the first time since...I can't recall when. That's how often she's appeared in this series, I genuinely can't recall if she's had another appearance since 'Primal Scream' —her last relevant episode. Either way, she appears for the first time since then, but once again, not in a capacity that progresses her part of the story. Instead, she appears as something of an afterthought, almost as if the showrunners remembered at the last minute who their central villain is supposed to be.

The only relevant scene Harley gets here is at the start of the episode when Helena Kyle decides to end her therapy sessions with Dr. Quinzel, feeling she no longer needs to unpack. Harley suggests that Helena come back for one more session, implying that she seems to know Helena's secret. If Harley at any point put two and two together and realised that the Huntress had been Helena Kyle this whole time, that development happened offscreen. Truth be told, we haven't been seeing Helena's therapy sessions with Dr. Quinzel as regularly as we should've been because more focus was placed on her blossoming romance with Detective Reese. Speaking of which...

They finally did it. No, I don't mean sex. I mean, they finally got to first base after almost a full series of them bickering with each other, reluctantly working together, and having trouble trusting each other, at least up until Helena finally revealed her identity to Detective Reese. I wish I could say I cared for this aspect of Helena's character arc. But like Helena Wayne's wooden romance with District Attorney Harry Sims in the comics, I just don't feel it between these two, and that's largely due to the writing.

I love Shemar Moore and the way he plays off of Ashley Scott's Huntress, but I don't feel the romance was written in a way that developed organically. Part of that may have been due to the 13 episode limitation. The other part of it may have been due to the fact that Helena's attraction to Reese happened instantaneously, whereas it understandably took Reese some time to get used to Helena and be able to trust her. Like Harry Sims and Helena Wayne in the comics, I never truly felt like these two characters were operating on the same wavelength.

At best, I'm happy that Huntress finally got a consensual kiss from a man she actually likes, but I wish the buildup to it had been better handled and the kiss itself felt more earned. I admittedly also wish the romance had happened in a way that didn't actually rob Helena's co-stars Dinah and Barbara of screen time, which...gets me to my next point:

We finally get a follow-up to Barbara's own romantic relationship with Wade, but like Helena's romance with Reese, it hadn't had the proper room to develop. The few times we saw Wade and Barbara together, it was always during a dinner date or Barbara dealing with Wade's ableist parents. There had been little progression between Wade and Barbara as a couple that when we learned of their planned holiday together, it felt like another case of 'significant developments happening off screen.'

Just like with Reese and Helena getting to first base in this episode, Wade finally learning Barbara's secret life as a crime-fighter (albeit via Alfred's intervention) should've felt more impactful than it actually was. Instead of feeling on the edge of my seat over what was—by all accounts and purposes—a significant next step, I was similarly left feeling cold. Again, the lack of good build-up may have been due to the 13 episode limitation, but the few times we saw this couple, they weren't exactly given much to do apart from retreading old ground that was already covered in previous episodes.

Luckily for me, though, Barbara and Helena's respective romances with the men in their lives wasn't what had me invested in this episode. Rather, it was the fact that we got a follow-up to some of the developments that were established in the first episode, complete with proper use of its lead heroines—something that hasn't been happening enough throughout the series.

We learn in this episode who it was that really killed Catwoman, and it was Batman's old foe Clayface. Admittedly, I do think Clayface's role in this story should've tied more strongly to Batman's side of Helena's story since that's the one major issue in Helena's life that hasn't been addressed. We know Helena resents her father for not being there for her when her mother died, and especially for not avenging her death. I felt that revealing Clayface as her mother's killer should've linked back to the Batman/Joker war that was established in episode 01 in order to give Helena incentive to further look into it, possibly even lead her to Harley Quinn. Instead, Clayface uses Catwoman's death to exploit the Huntress' anger in order to make his escape.

In addition to the Clayface revelation, we also learn in this episode that he has a son who is obsessed with upstaging him as a criminal. The revelation of Clayface's son provided opportunities for Oracle and Huntress to work together as a team, which once again provided Oracle with opportunities to showcase both her science and investigative skills—something I always enjoy seeing.

My only complaint about the teamwork in this episode is that Dinah is once again under utilised, which is frustrating because she is the character with the strongest potential to evolve heroically as the story progresses. While Rachel Skarsten makes the most out of the little screentime she is given, I still feel her character should be functioning as a full team member by this point. I feel we should be seeing how much she has grown from episode 01 by the penultimate episode.

On the whole, this was a more enjoyable episode than the last because it starts to get back on track with what the series should've been about in the first place. The only problem is it's the penultimate episode, and so many of the plot threads are still left half-addressed. By this point, there is only one episode left to try and wrap it all up.