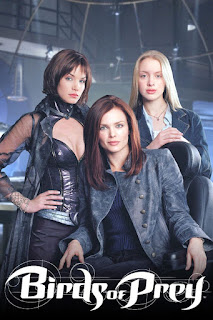 Summary: Harley hires Slick, an evil meta-human who can turn from solid to liquid, to kill the honest cops who thwart her evil schemes. When Reese becomes the next intended victim, Helena protects him, and their mutual attraction continues to grow.

Review: The pilot episode of Birds of Prey fulfilled its job of introducing the main characters, the main villain, the premise, and central theme. It also functioned as the first chapter to the much larger story of series 01: a string of suicides that appear to be happening at random until they start forming a pattern that doesn't go unnoticed by Barbara Gordon as Oracle. Unaware that the villainous mastermind behind these mysterious deaths is Helena Kyle's own psychiatrist, Dr. Harleen Quinzel (Harley Quinn), Oracle sends the Huntress on a mission to investigate these deaths, which is where episode 02 really picks up.

Let’s start by saying the opening scene addressed one of my first concerns from the pilot episode about an underage Dinah running away from home from seemingly loving parents. I loved the fact that Barbara did ask Dinah for her records, which is the first thing she should’ve done, in my opinion. However, I’m still glad they addressed that here, so better late than never.

I still find it a bit odd that Barbara still kind of took her in as her ward regardless of verifying the actual status of her parents. At the very least, however, the justification given was Barbara understanding that a kid with metahuman abilities like Dinah wouldn’t necessarily be understood by normal parents. On that note, we learn a bit more about Dinah’s origin in this episode. Specifically that she’s been in the foster care system most of her life because her parents gave her up, which sets up for future stories for her.

On the subject of Barbara, in addition to being a mentor to the Huntress and now Dinah, Oracle is also established as an inventor in this episode, which is a logical direction for the tech-savvy character. Apart from inventing new crime fighting tools, she’s established as working on technology to further assist her restricted mobility and improve her quality of life.

Barbara's paraplegia is not ignored in this episode, but is is also not the sole focus of her character. She is still depicted as living life to her fullest—including having a love life—while living her life differently. We also see how hard it is for Barbara to balance her normal life with her vigilante lifestyle, and still make room for the other people in her life, especially outside of her superhero activities. These developments are pretty significant as they allow Barbara to be complex and have depth as a character, which is also one way Birds of Prey was ahead of its time in 2002.

One last thing that's notable about Oracle in the second episode is her detective skills while investigating a mysterious death caused by drowning in the absence of water. This will become one of her more strongly identifiable traits as the series progresses.

Moving on to the last protagonist of the show, we become acquainted with Helena Kyle’s lack of trust in other people, which ironically makes her similar to her father. At least assuming her father is still depicted as a distrustful individual in this universe like his post-Crisis counterpart in the comics. In any case, Helena's trust issues are most notable in her interactions with Dinah throughout the second episode.

I’m admittedly not a fan of the adult Helena being depicted as a rude jerk to a teenage girl. This is especially true when you consider that—as a metahuman herself—she should be a bit more understanding of the girl’s complicated position. However, she's not entirely in the wrong to point out that in order to gain her trust trust, Dinah needs to be more honest about who she is, where she comes from, and what she’s really after. This is especially important in a city like Gotham (or New Gotham in this case) where people betray each other all the time as a way of gaining leverage in power circles. A system Helena is all too familiar with.

Following her confrontation with Helena, we do learn a bit more about the real reason Dinah wanted to join Barbara and Helena’s team. It turns out it was mainly due to her learning she wasn’t the only metahuman in the world and wanted to connect with someone just like her, in this case, Helena. This is not unrealistic for a teenage girl dealing with abandonment issues and who is sorely lacking a reliable adult role model in her life. This actually makes Dinah a more sympathetic character and gives the viewer a stronger incentive to invest in her character's journey. Learning more about what drives Dinah also gives the character depth.

As for Helena's own response to Dinah admitting her admiration for her and wanting to be like her, Helena is is quick to show she is not comfortable fulfilling this role in her life, most likely due to her own trust issues and possible self-loathing. These feelings are probably further amplified by Dinah admitting how being put in the foster care system by her parents shattered her self-esteem, especially in a household where she was discouraged from using her powers.

I have to admit, I'm not sure how I feel about that last part since it feels profoundly out of character for Dinah Drake (Dinah’s mother in the comics), but I’ll have a more concrete opinion on this development when I see more of Dinah’s backstory.

The last thing I enjoyed from episode 02 was Helena choosing to confront her own trust issues with Detective Reese. The scenes with Reese afforded Helena the opportunity to self-reflect and change her attitude not just about trust, but also towards Dinah who needs it the most. I feel that so much of Dinah and Helena's developments throughout this episode are setup for their future development as characters, which will in turn continue to shape their idea of family.