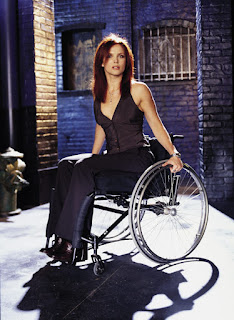 Summary: Helena and Reese clash when they both try to track down a serial killer who destroys metahumans by usurping their powers. Meanwhile, Dinah skips going to school when she learns from Helena that there is a metahumans only bar.

Review: This episode introduces a new villain whose role in the story creates opportunities for character growth for both Dinah and Helena.

On Helena's side of the spectrum, she decides in this episode that she wants to start trusting other people, and even begins to think about what kind of life she wants to have outside of being the Huntress. Helena also starts accepting the ‘big sister role’ she’s fulfilling for Dinah who is still not comfortable being around other people, especially other kids in school. This causes Helena to move away from her usual ‘reluctant hero’ demeanour to becoming someone who sees the importance of being a positive influence in a young person’s life.

With Dinah and Helena being metahumans in this series, their narrative functions as a metaphor for marginalised kids needing an adult in their lives who understands their journey and is there to provide them with emotional support as they struggle to accept themselves and meet others who accept them as they are. Much of this episode is thematically centred on institutionalised prejudice against marginalised groups and the violence they experience by law enforcement—a narrative that is still relevant in this decade.

The theme of institutionalised prejudice is experienced by all of the main characters in this episode. Barbara Gordon experiences this in the form of ableism when she meets her boyfriend’s parents, who reject her twice due to her disability. Though her boyfriend still loves and accepts Barbara as she is, the fact that his parents aren't comfortable with their son dating a paraplegic still puts Barbara in an uncomfortable position. Despite being fully capable of taking care of herself with little assistance from others, her boyfriend's parents aren't convinced she isn't going to require external care from him, which doesn't get any of them off to a good start.

In the case of Dinah, she experiences institutionalised prejudice as a teenager who is aware of the fact she is different, and the paralysing anxiety that comes with the thought of being found out by the ‘normal’ kids at her new high school. Her intense fear of rejection causes her to find solidarity through both Helena and the metahuman club No Man’s Land. Fear of being discovered is an all too familiar narrative for LGBTQA kids, and being aware of one’s differences in a school where everyone else is the same is a familiar narrative for kids of colour, especially black and brown kids in mostly white schools.

For Helena, her experience with institutionalised prejudice in this episode came in the form of a law enforcement officer who ‘hates her kind’ and wants to murder her for being what she is. This is a terrifying reality for black and brown-skinned people in America and even the LGBTQA community. Though Helena herself is neither a person of colour, nor a confirmed member of the LGBTQA community in this series, her status as a metahuman makes her a stand-in for both communities, just like Dinah.

In the case of the cop pursuing and murdering metahumans in this episode, he happens to be a metahuman himself. However, he also happens to benefit from white male privilege, which prevents others—including his black partner—from immediately suspecting him of the murders, even when he makes his bigotry and hatred explicitly known. This is one way that intersectionality is explored in this episode as his marginalisation in one aspect of his life does not erase privilege in two other areas of his life.

Another way intersectionality is explored in this episode is through the interaction between Helena (a metahuman) and Detective Reese (a black man), the latter of whom used dehumanising language like ‘creatures’ and ‘things’ to describe her group of people. Though Helena rightfully calls him out on this as part of the reason he hasn’t earned her trust, Reese is also not ignorant nor oblivious to the fact that his language was dehumanising towards her. Earlier in the episode, Reese did take note of his white partner's intense hatred of metahumans and even called him out on his tendency to describe them as ‘animals’, ‘creatures’, and ‘things’ who are incapable of behaving instinctually like humans.

The white partner, of course, does turn out to be the same murderous cop who has been pursuing and murdering metahumans throughout this episode. But more to the point, Reese’s contradictory behaviour in both the presence and absence of his partner is also consequential of the power imbalance that exists between them. In this case, Reese's partner has more institutional power than he does, which affects the way Reese behaves in situations where his authoritative power varies. Nevertheless, however, Reese’s behaviour towards Helena wasn’t any less harmful to her, which was a responsibility he had to accept.

In addition to the institutional violence and microaggressions experienced by marginalised people on a daily basis, the last major theme that is explored in this episode is solidarity and community, which is how the lead characters are all able to overpower the metahuman cop who's been hunting and killing members of their community. They are there to support each other as needed, and most importantly, are ready to protect each other from harm. That’s what each of the characters end up doing for each other, which ended with a strengthening of their relationships.

Comic Book Easter Eggs: The villain of this episode comes from Blüdhaven, which is the city Nightwing operates from in the comics. Also, the name of the pub that Gotham's metahumans hang out at, No Man’s Land, is a reference to the 1999 Batman event of the same name in the comics. The characters of Oracle and the Huntress (Helena Bertinelli) had important story arcs in that event.